Our first KOA experience was a mixed bag. The location and grounds were very nice, but the cabin itself was a pretty small 1-room affair. Wherever they were available I reserved two-room cabins (or if you prefer the more formal term, kabins). They are usually about $10 more but I suspect it will be worth it. We also left the air conditioner off thinking it would be cooler, but it got stuffy in the night and between that and the squeaky mattress pads a couple of us slept fitfully until Rebecca got up and turned the conditioner on. After that we all slept better.

I got up and made some coffee in the communal outdoor kitchen. We had pop-tarts and fruit for breakfast and then packed up, getting on the road around 10:30. Not a bad one night stop, all-in-all: 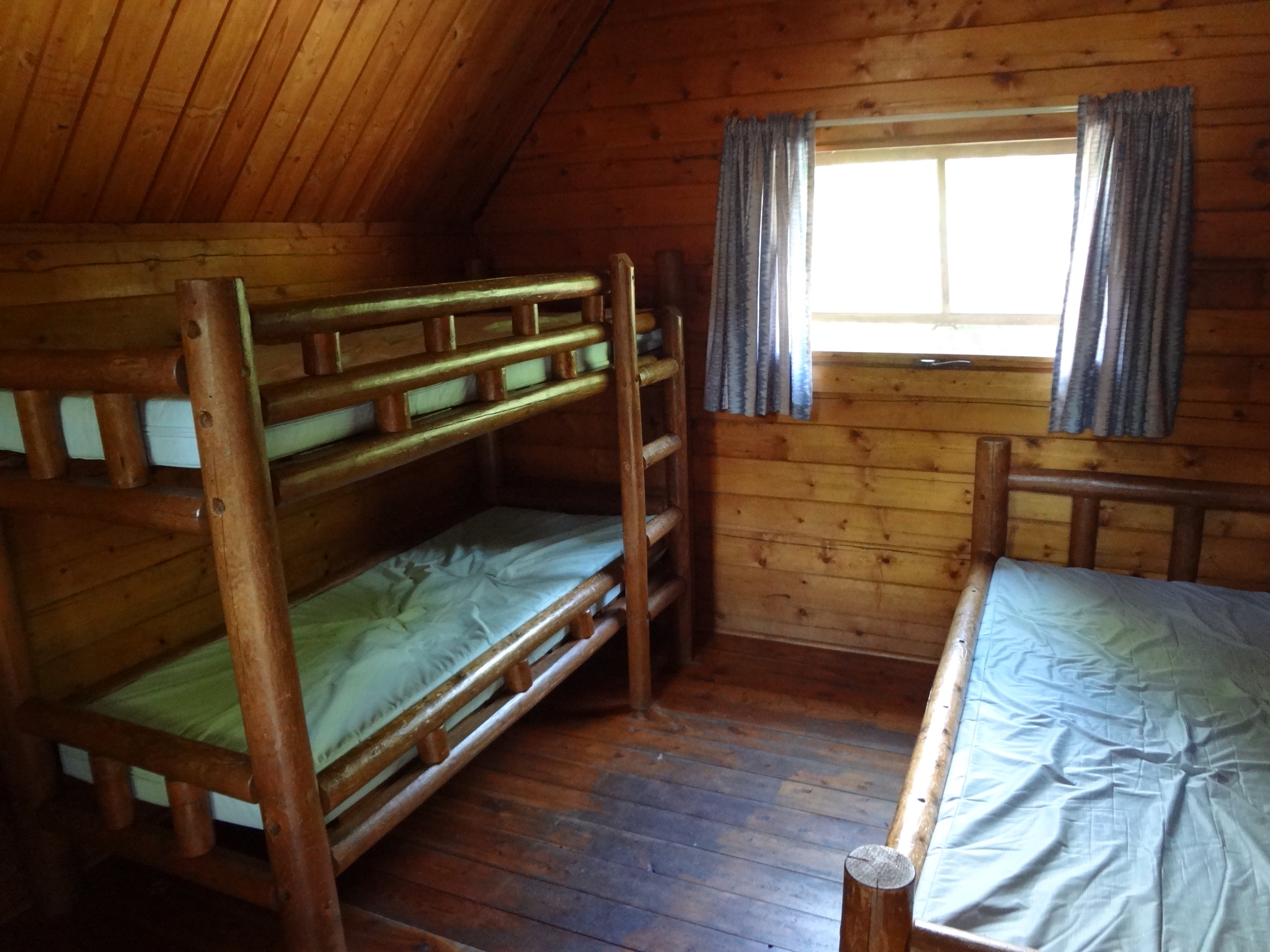 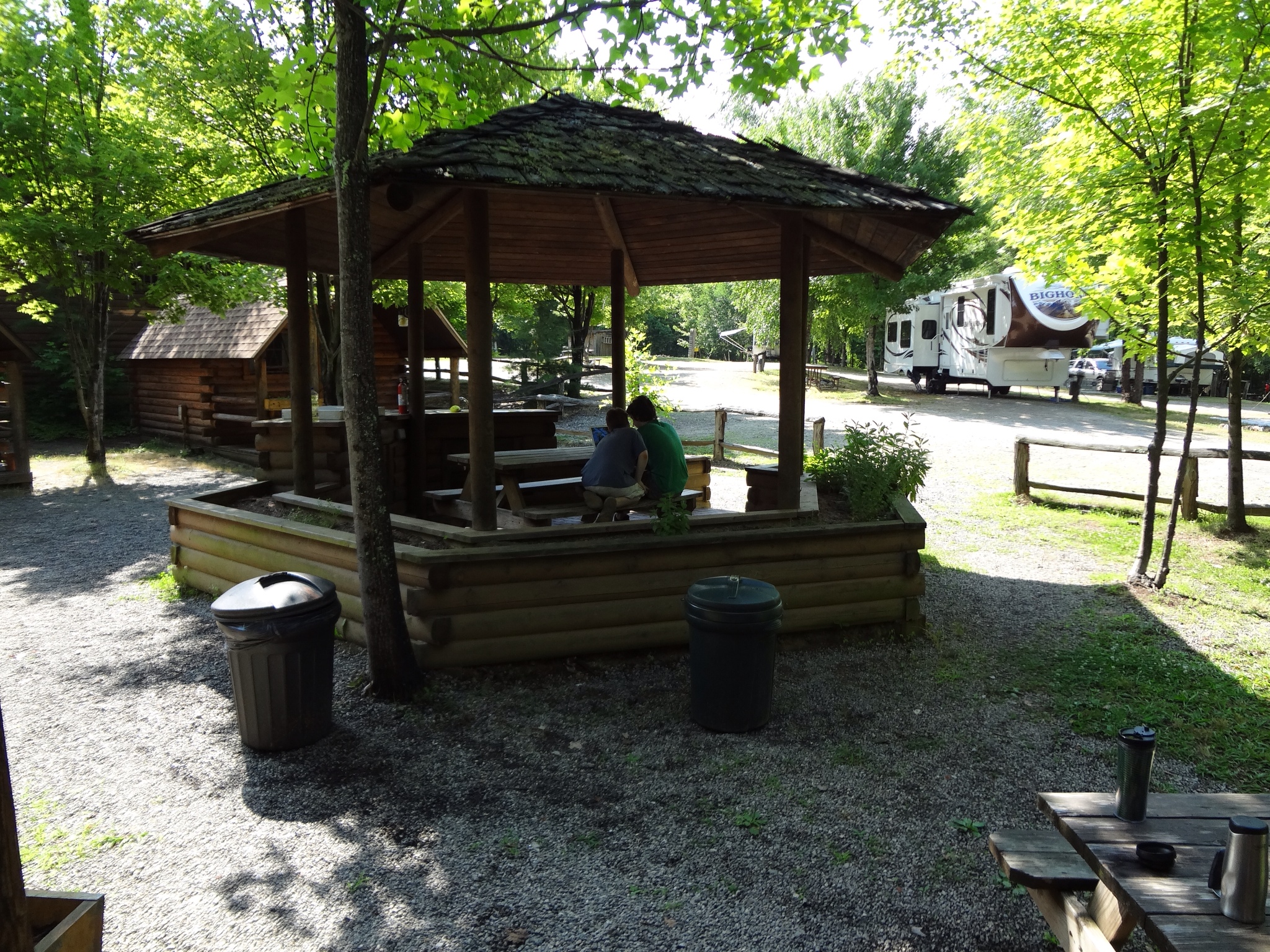 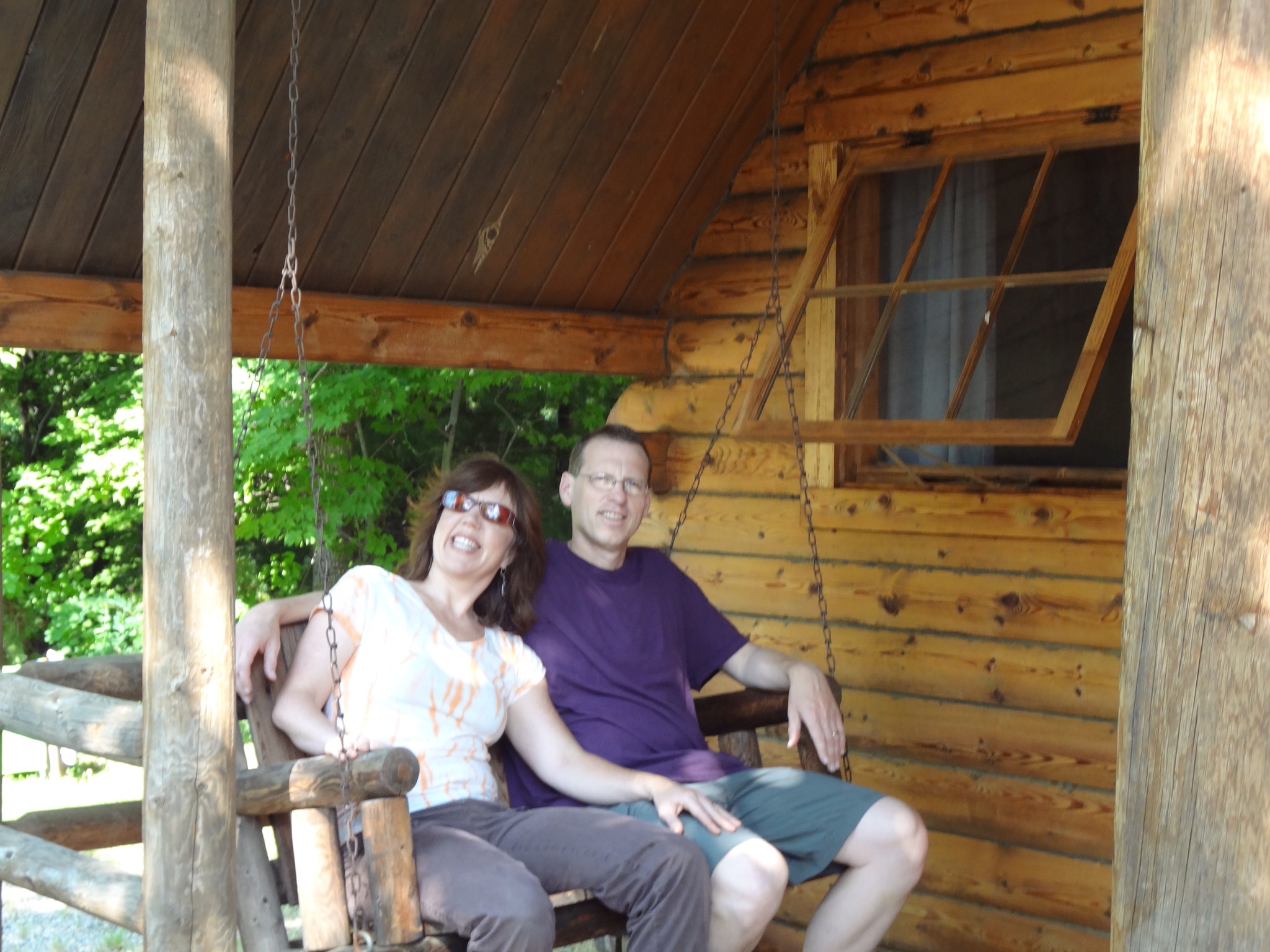 We decided on the southern route to Smoky Mountains by Cherokee, NC. It was a little longer but took us through the center of the park rather than through Gatlinburg, TN, which we would go through on our way out. We planned to stop at a grocery store on the way there and had trouble finding one until Cherokee itself. That's an interesting place. It feels very remote and sparsely populated as you drive through the Cherokee reservation into town, and then you turn a corner and see this enormous casino looming over the road. I didn't get a chance to take a picture, but there are some here.

We stopped at a Comfort Inn and a nice desk clerk gave us directions to a nearby Food Lion to stock up for the next two days. I secured a box of Krispy Kreme donuts but apparently we needed other things as well, like fruit and vegetables.

We got on the Parkway around 1pm and spent about an hour and a half driving the twisty and mountainous route to our campground, stopping for a few pictures along the way: 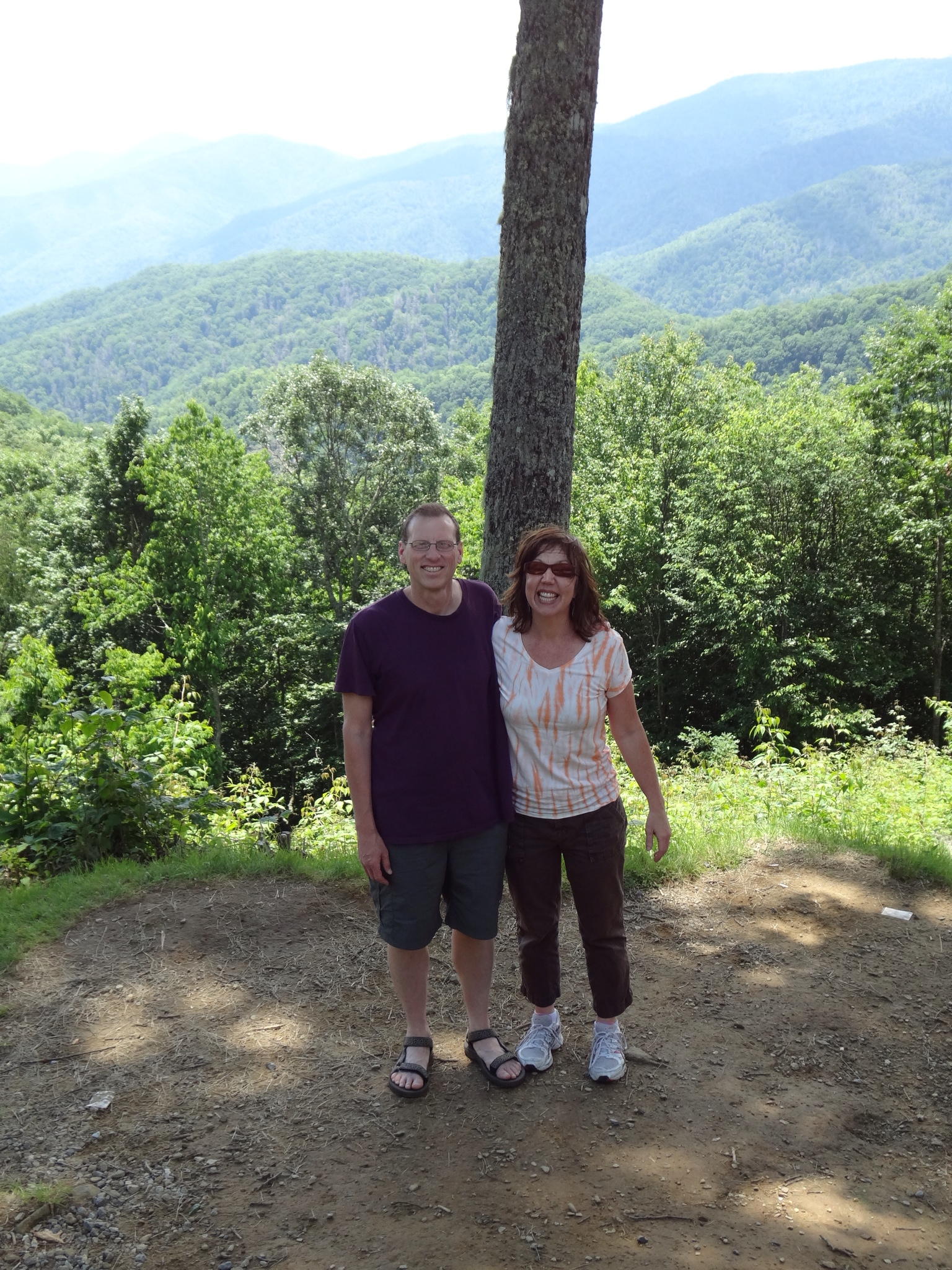 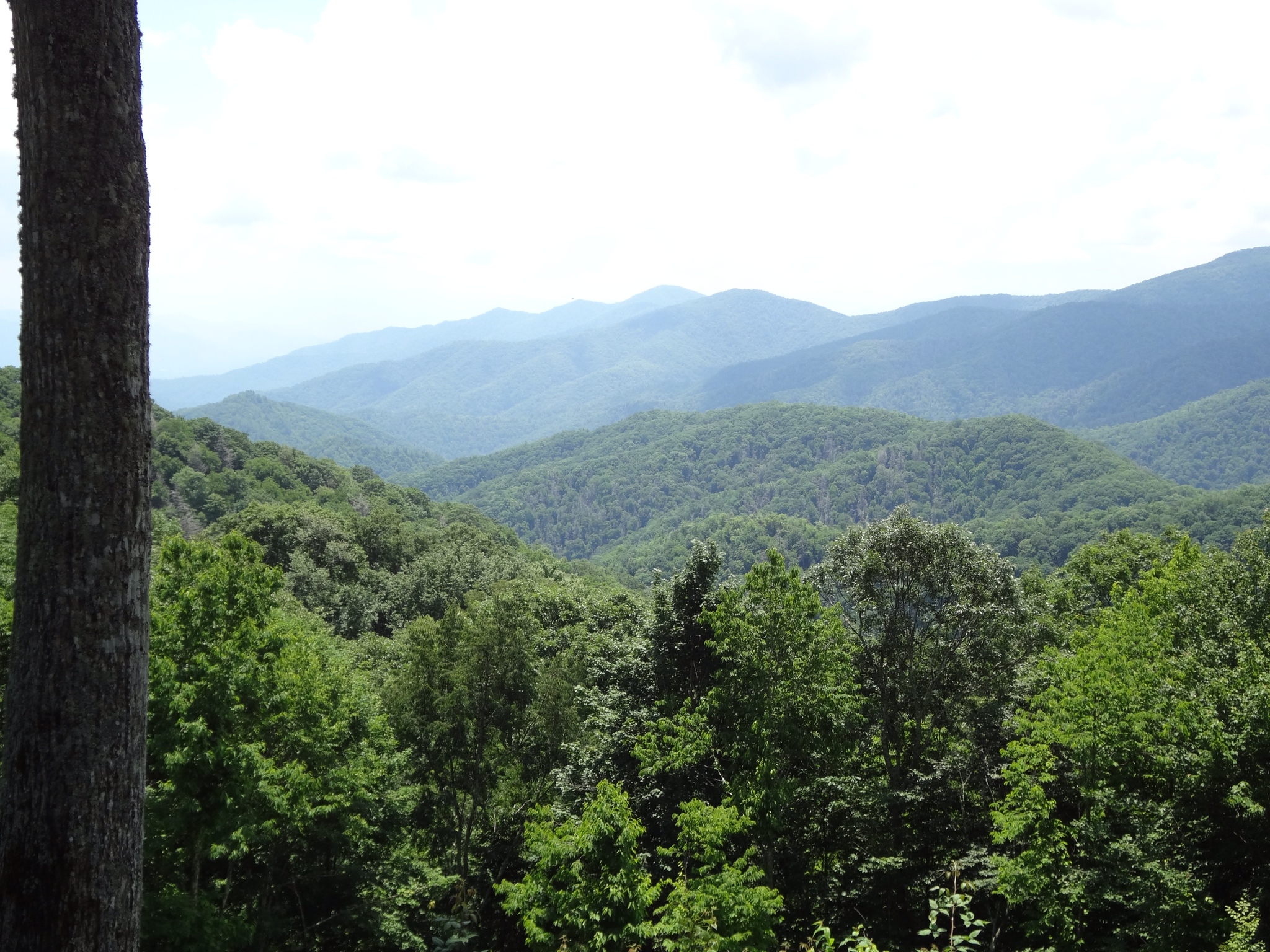 We checked into our tent-site at Elkmont Camground around 2:30. We were at site B18. When you reserve camp sites on line you can pick the location, but it's difficult to envision what the site will be like. This one turned out pretty good. It was along the creek on one side and had no site next to it as there was a hill behind it and then a road. We did have a large family across from the creek from us that made the site feel less private, but other then that I think I picked pretty well.
Here's Rebecca and Toby after we set up the tents, and Calvin in the stream next to the site. The rain nicely held off until we got the camp set up: 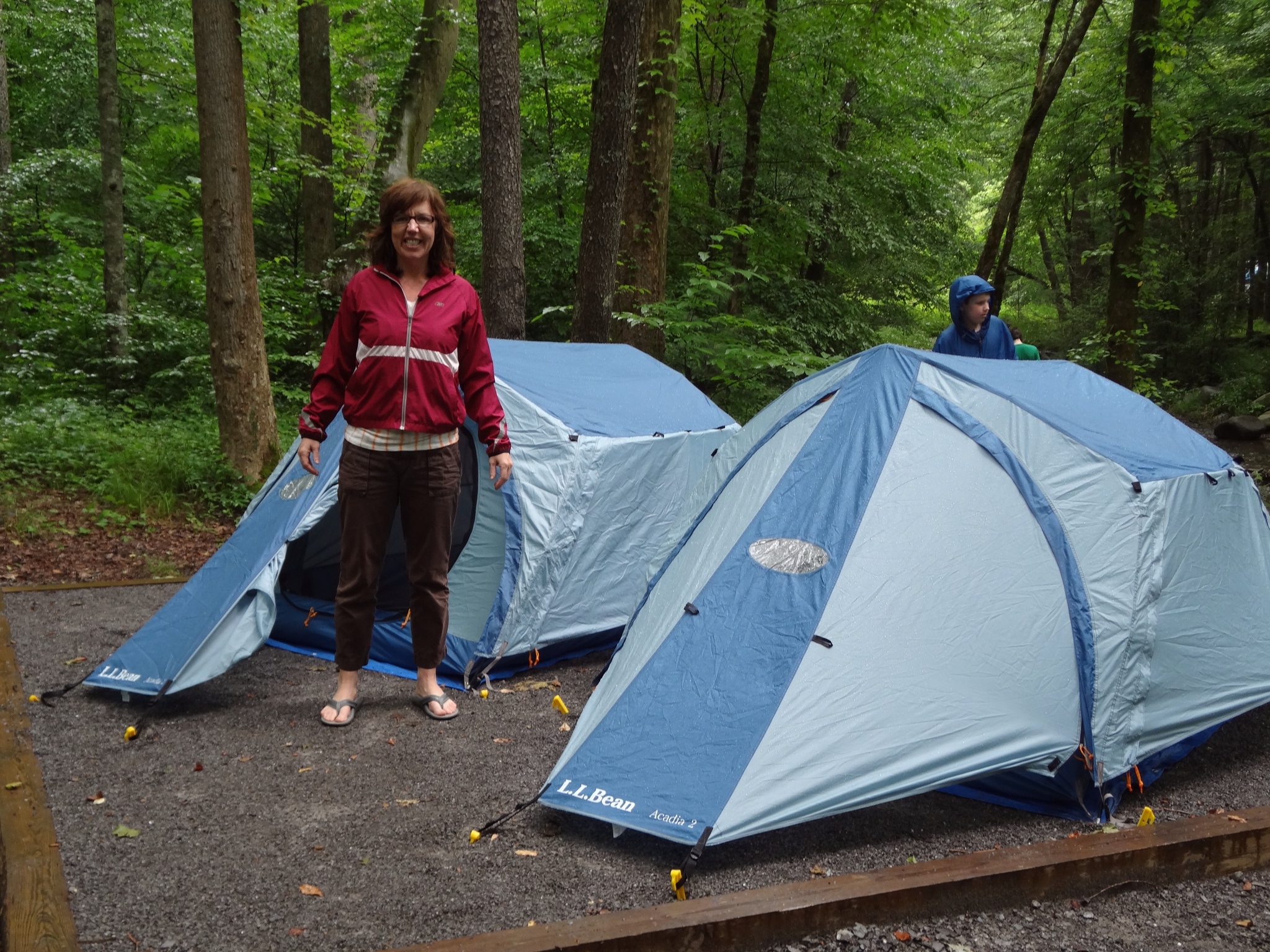 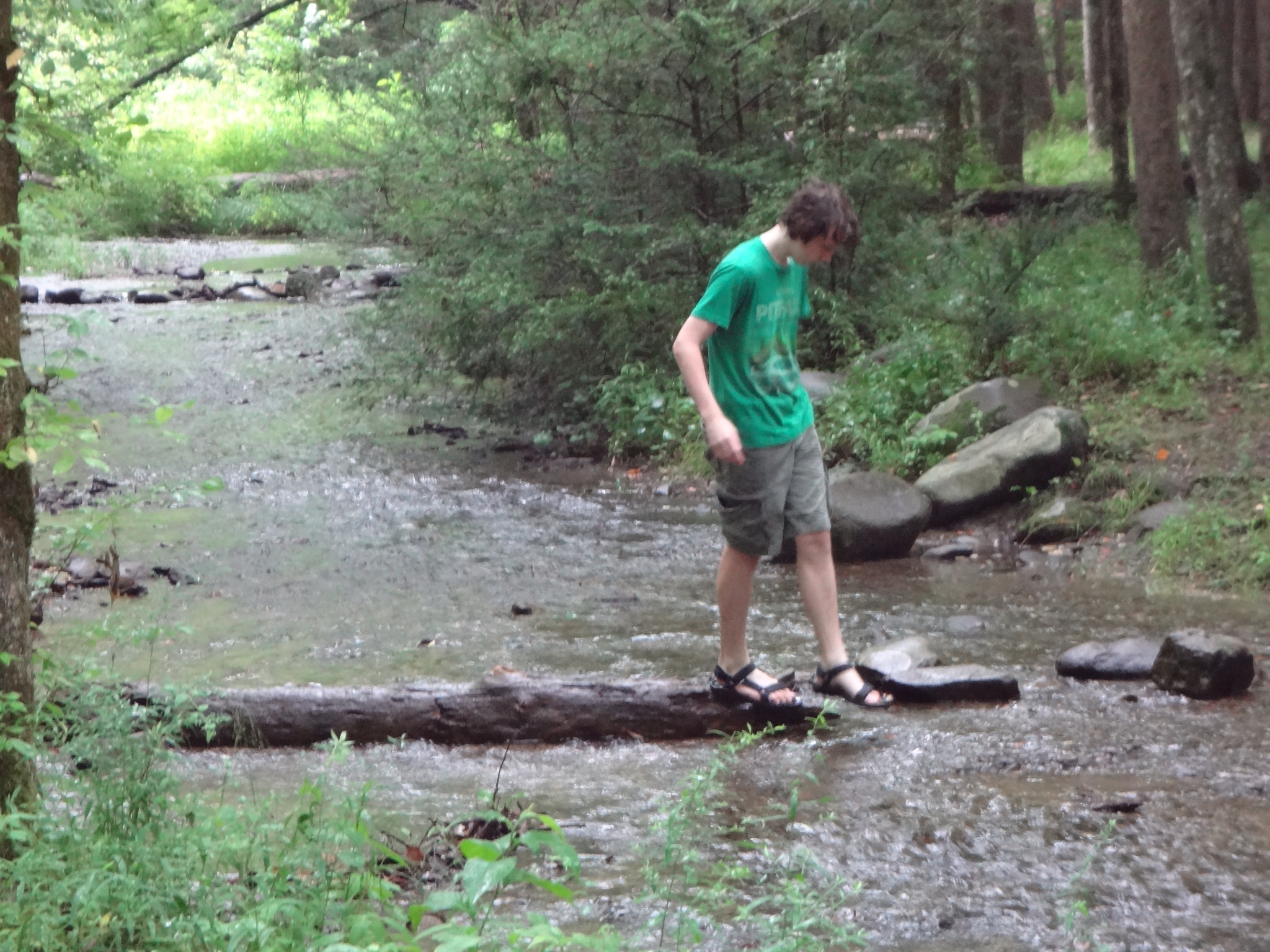 The rain cleared up pretty quickly and we decided to take a nearby hike to Laurel Falls. I read somewhere that Smoky Mountains is one of the most visited in the national park system. We certainly saw a lot of people and cars wherever we went. This particular hike is so popular that that it's been paved to prevent erosion. It was still a great antidote to the long drive in: 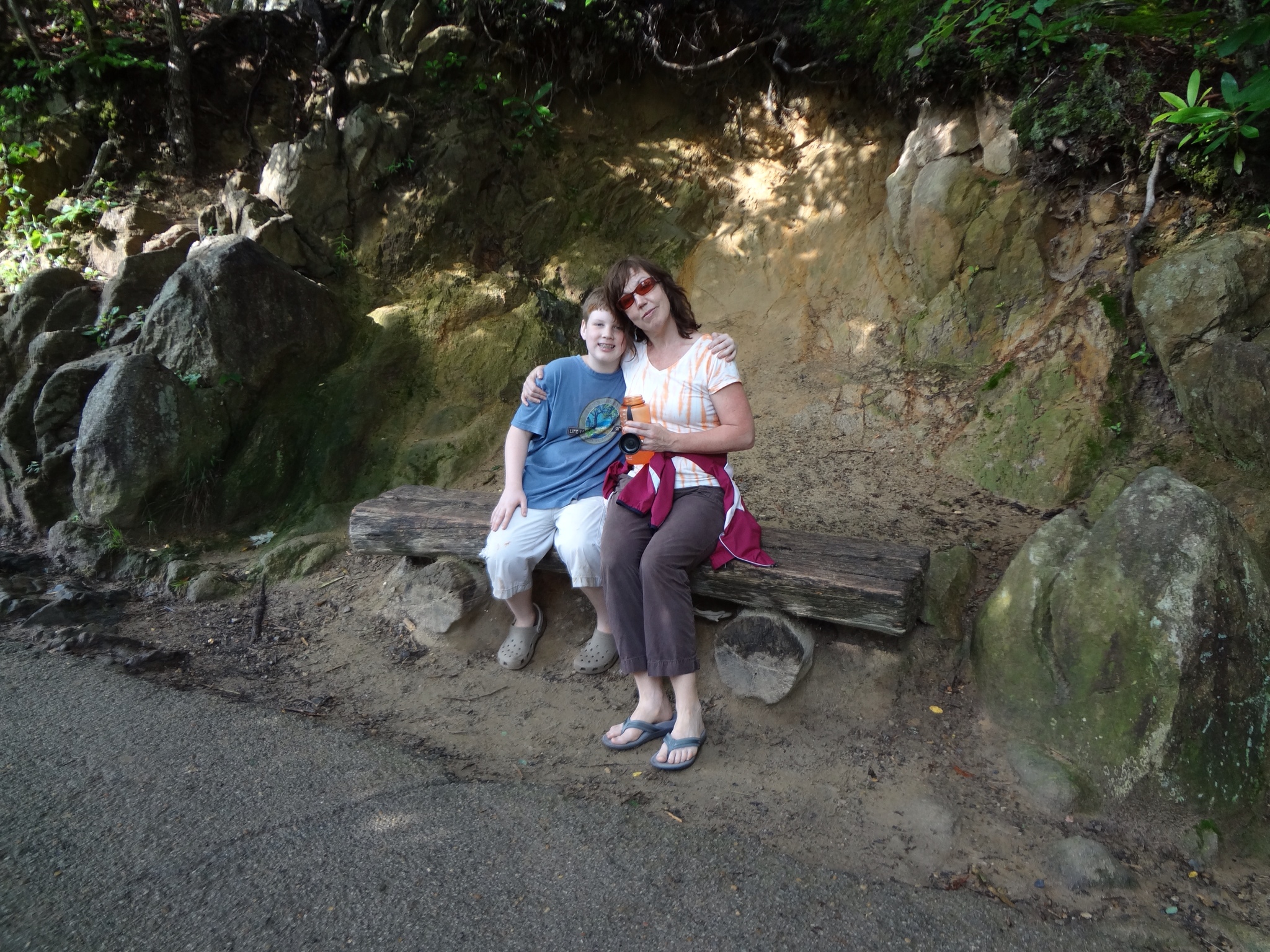 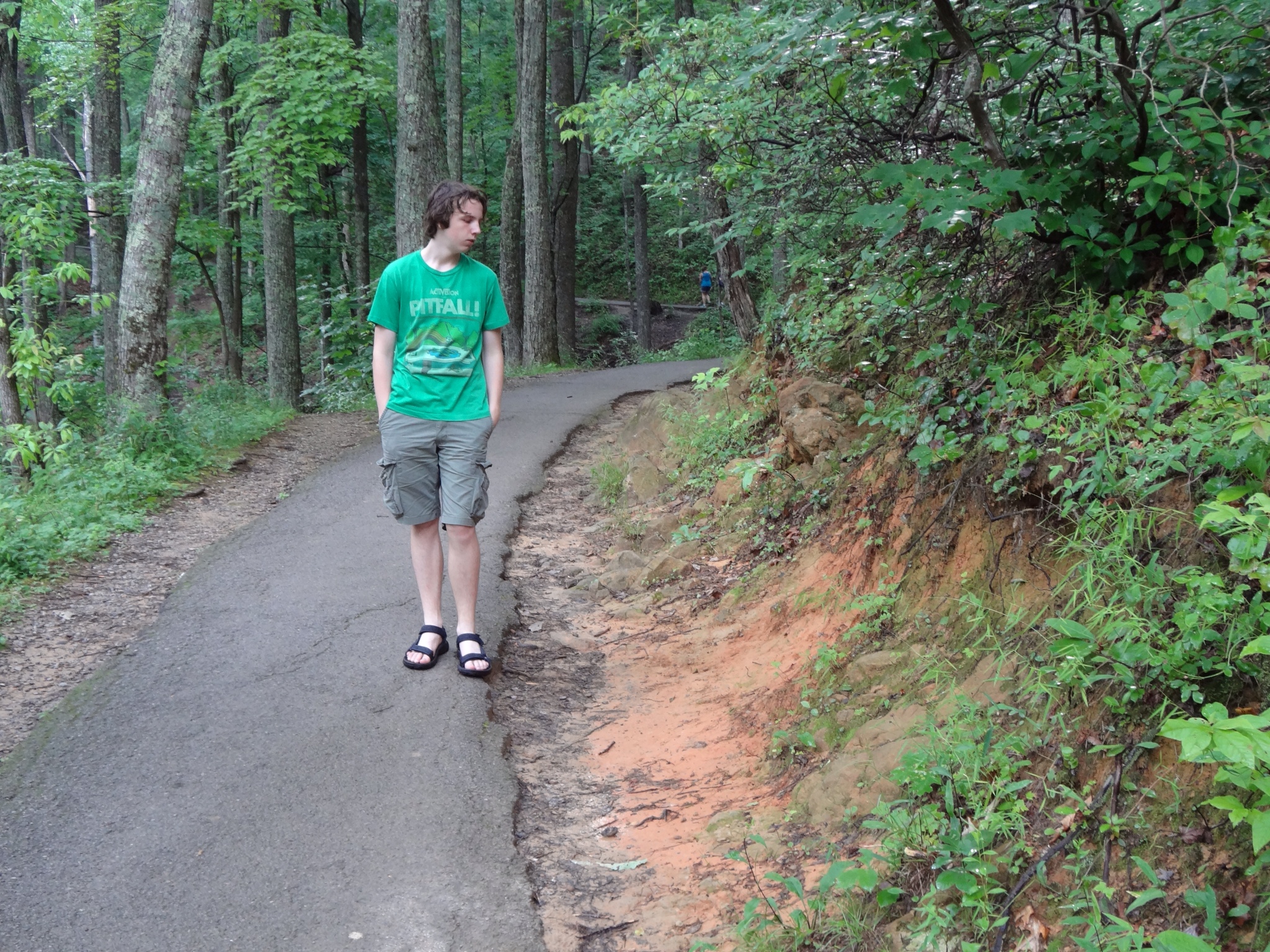 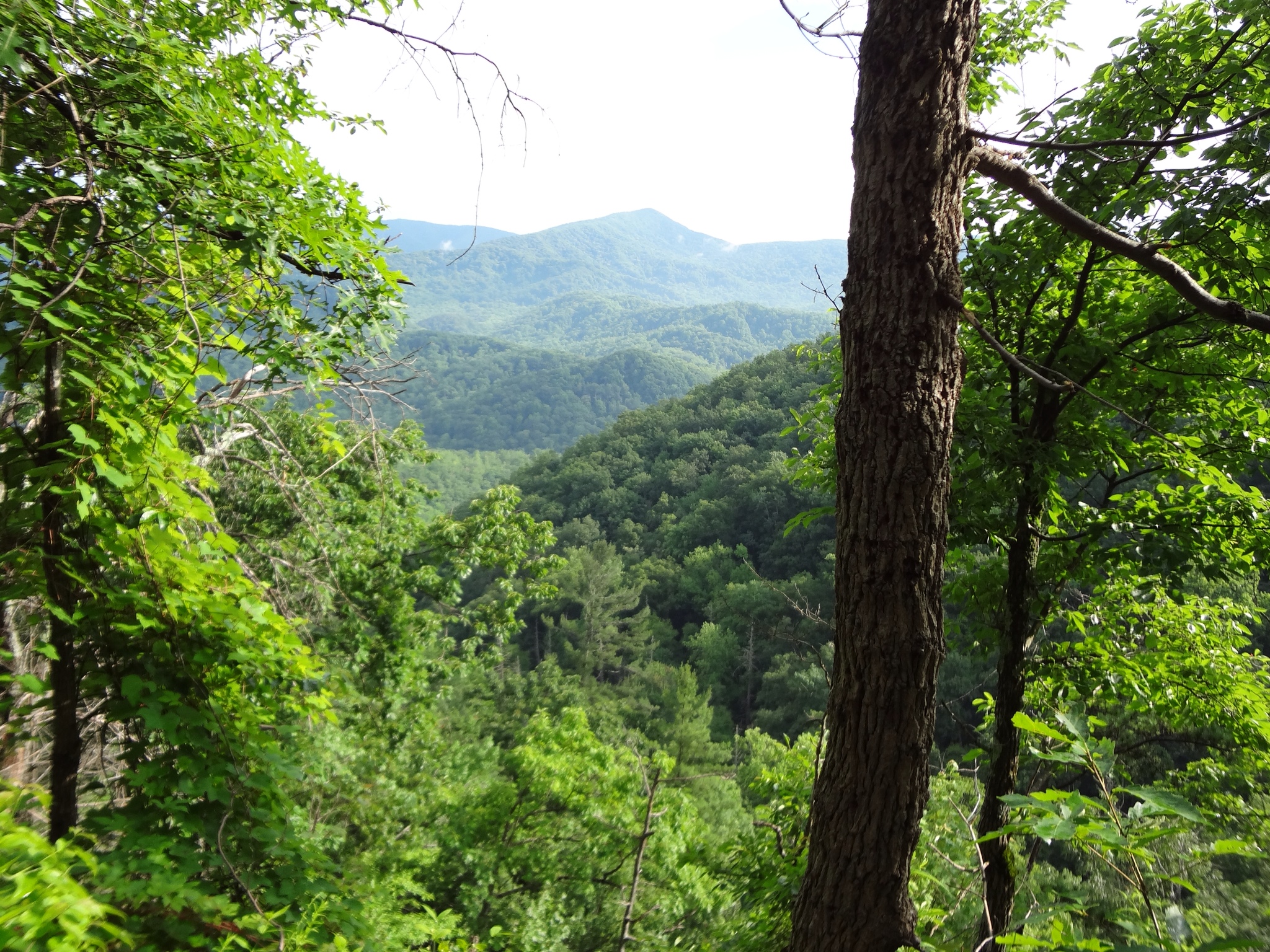 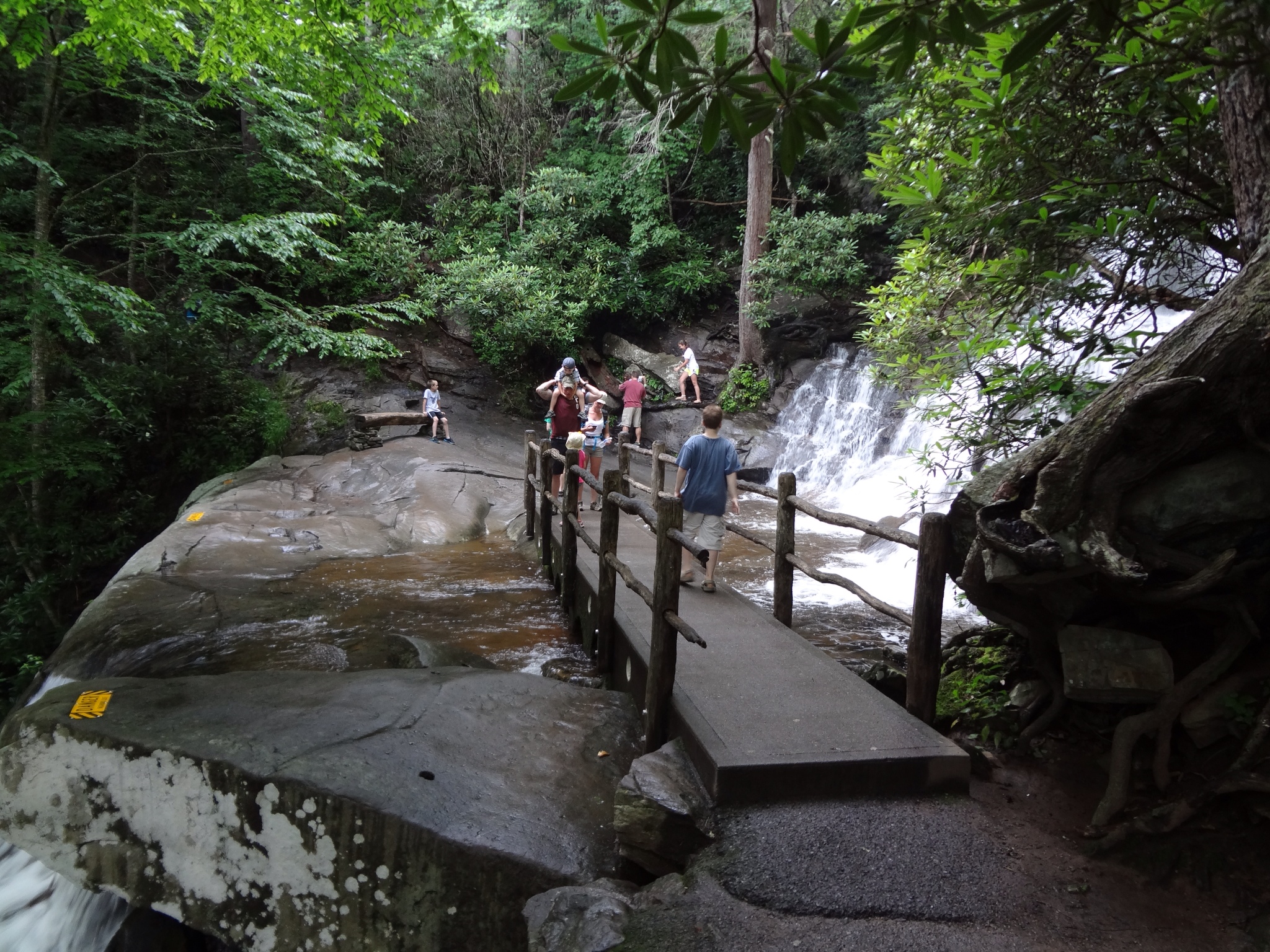 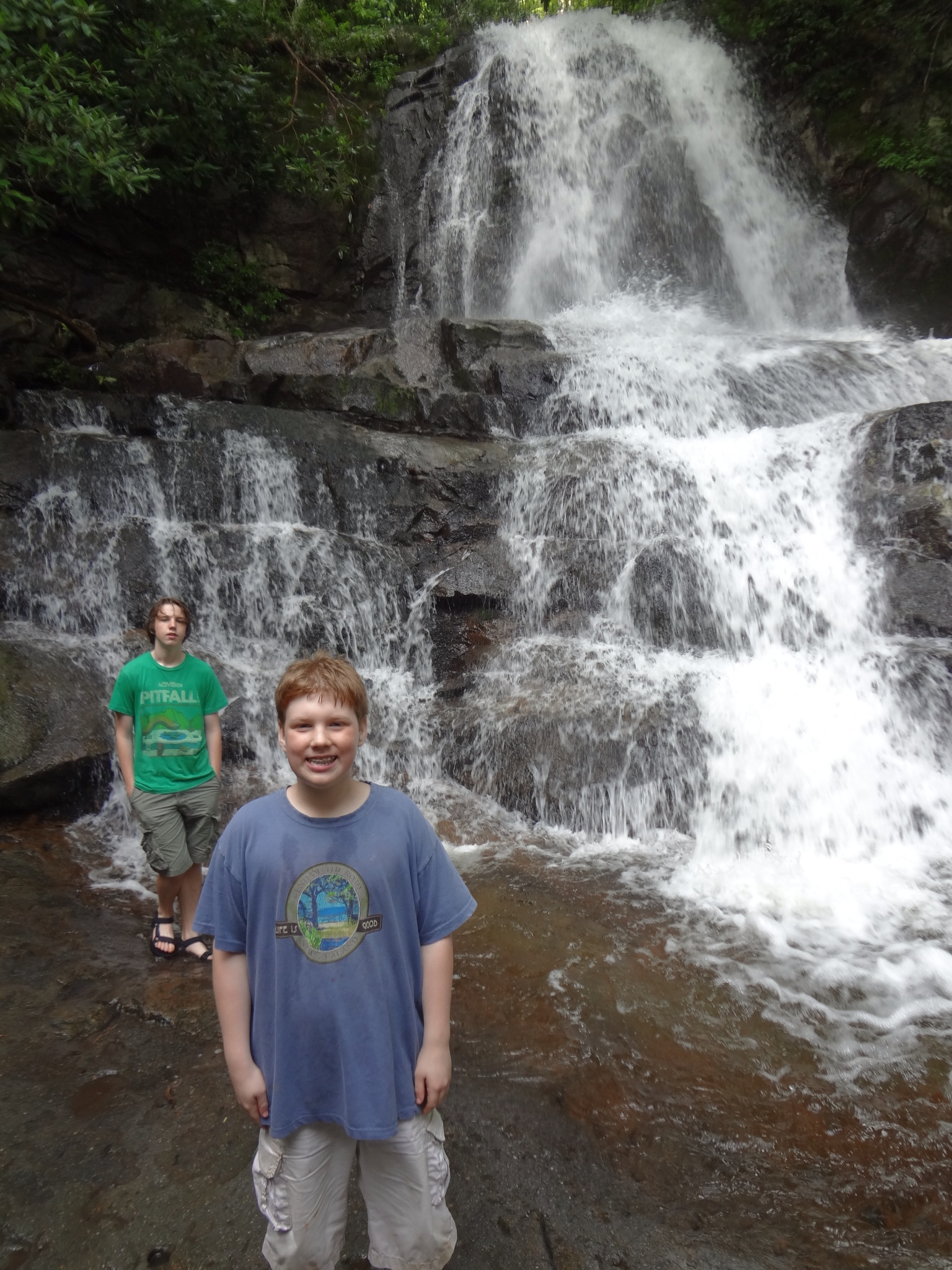 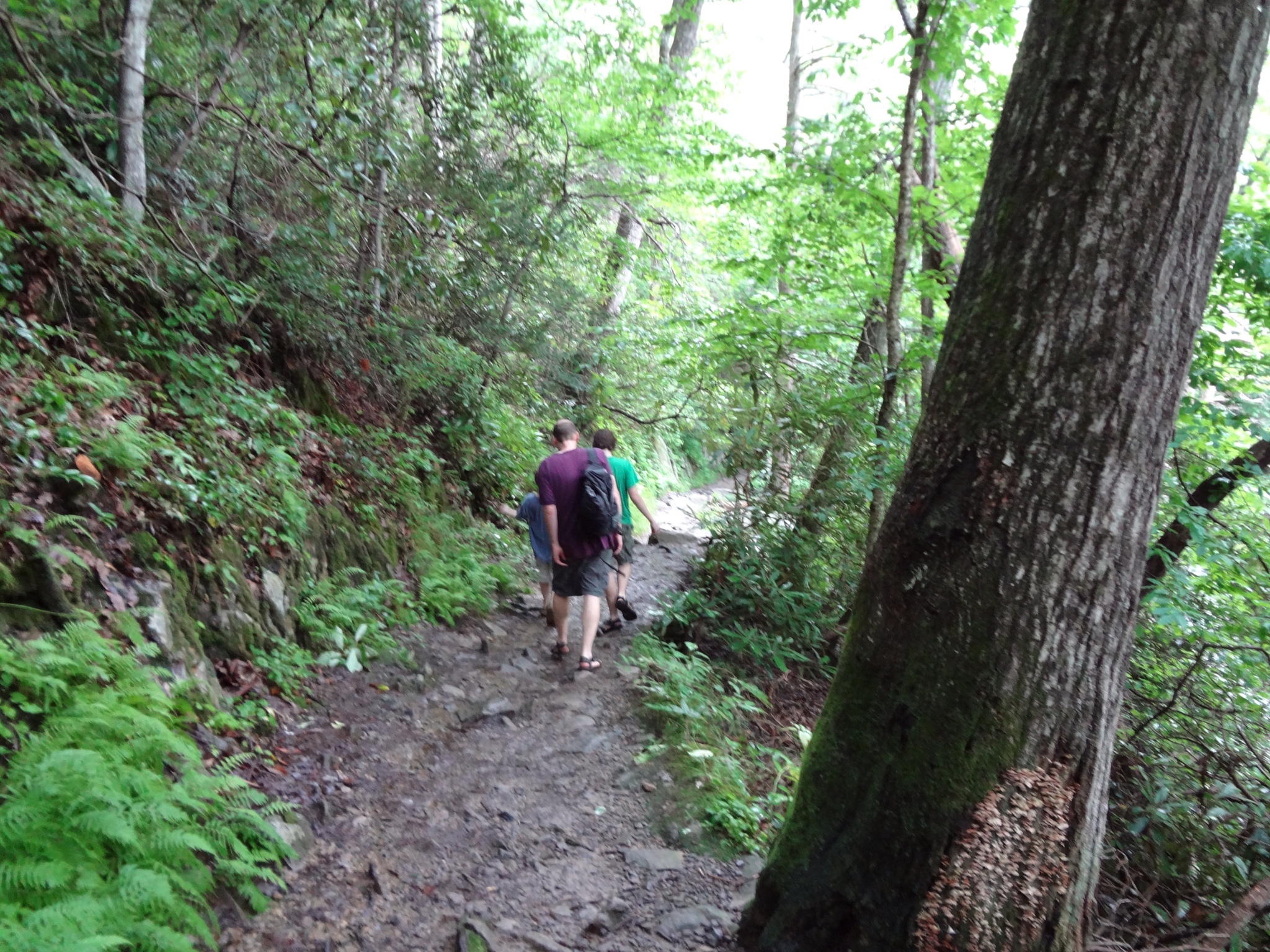 We got back to the camp around 7pm and made a quick dinner of mac and cheese and hot dogs. I was psyched to use the camp stove and cooking kit: 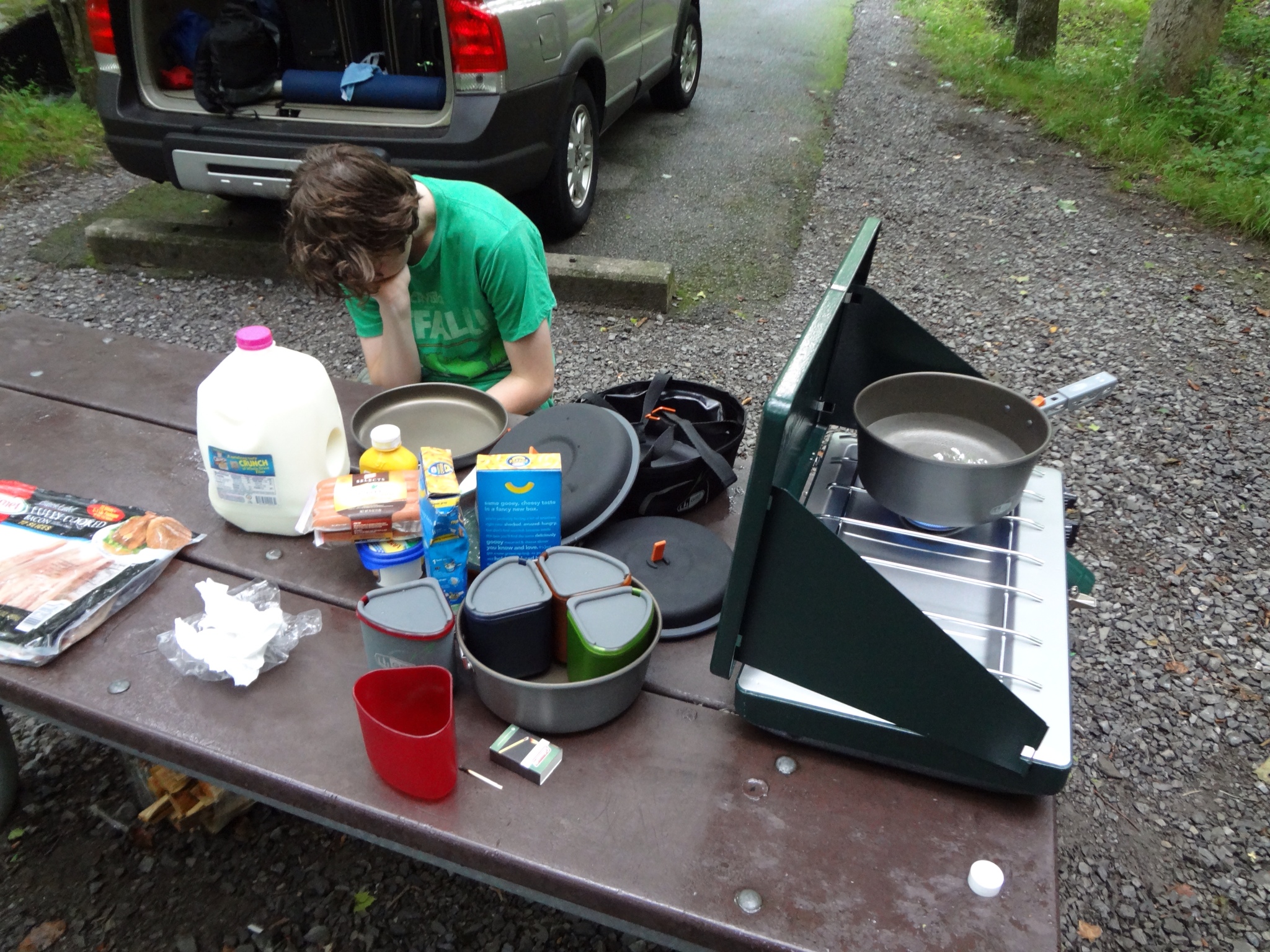 Earlier we had stocked up on wood and the makings for smores that we'd forgotten at the grocery store. Our campground had a nicely-stocked store that had everything we needed. There were a couple of older gentlemen men at the store, one manning it and the other playing a guitar. There was a nice national park vibe going on there.
Rebecca and I worked for about 1/2 an hour before we got a good fire going, as everything was pretty damp still. But we finally got it and had some smores: 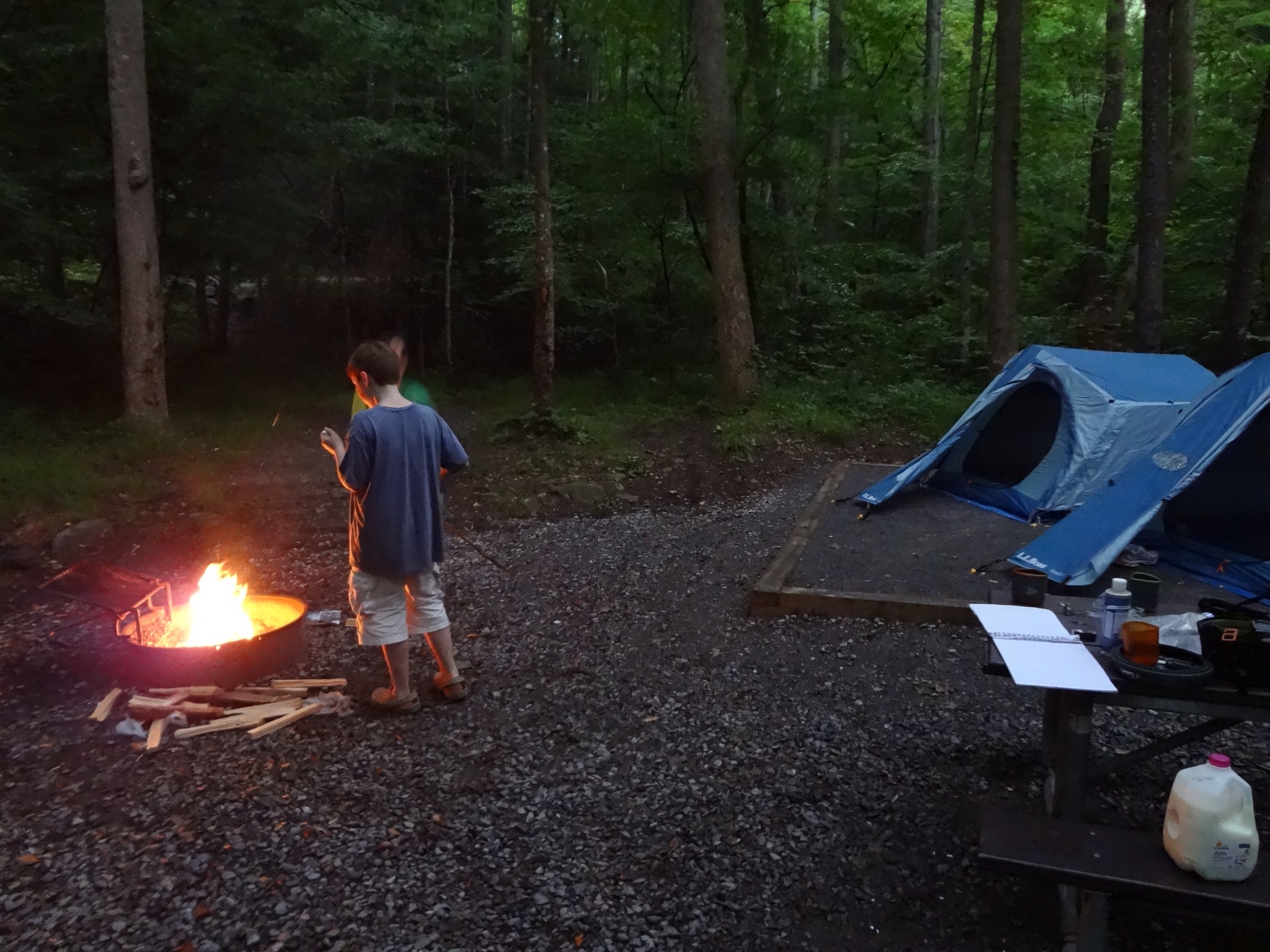 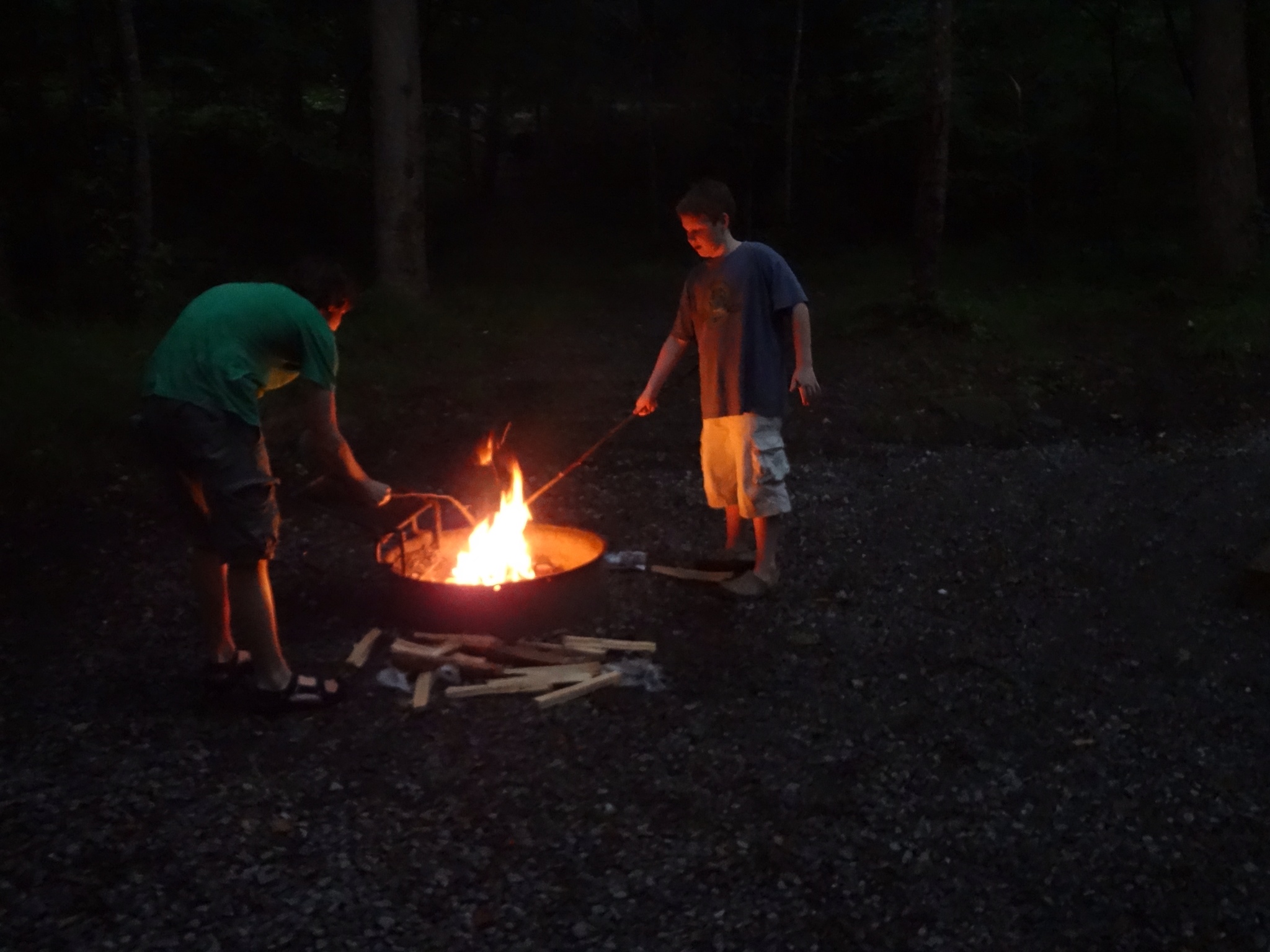 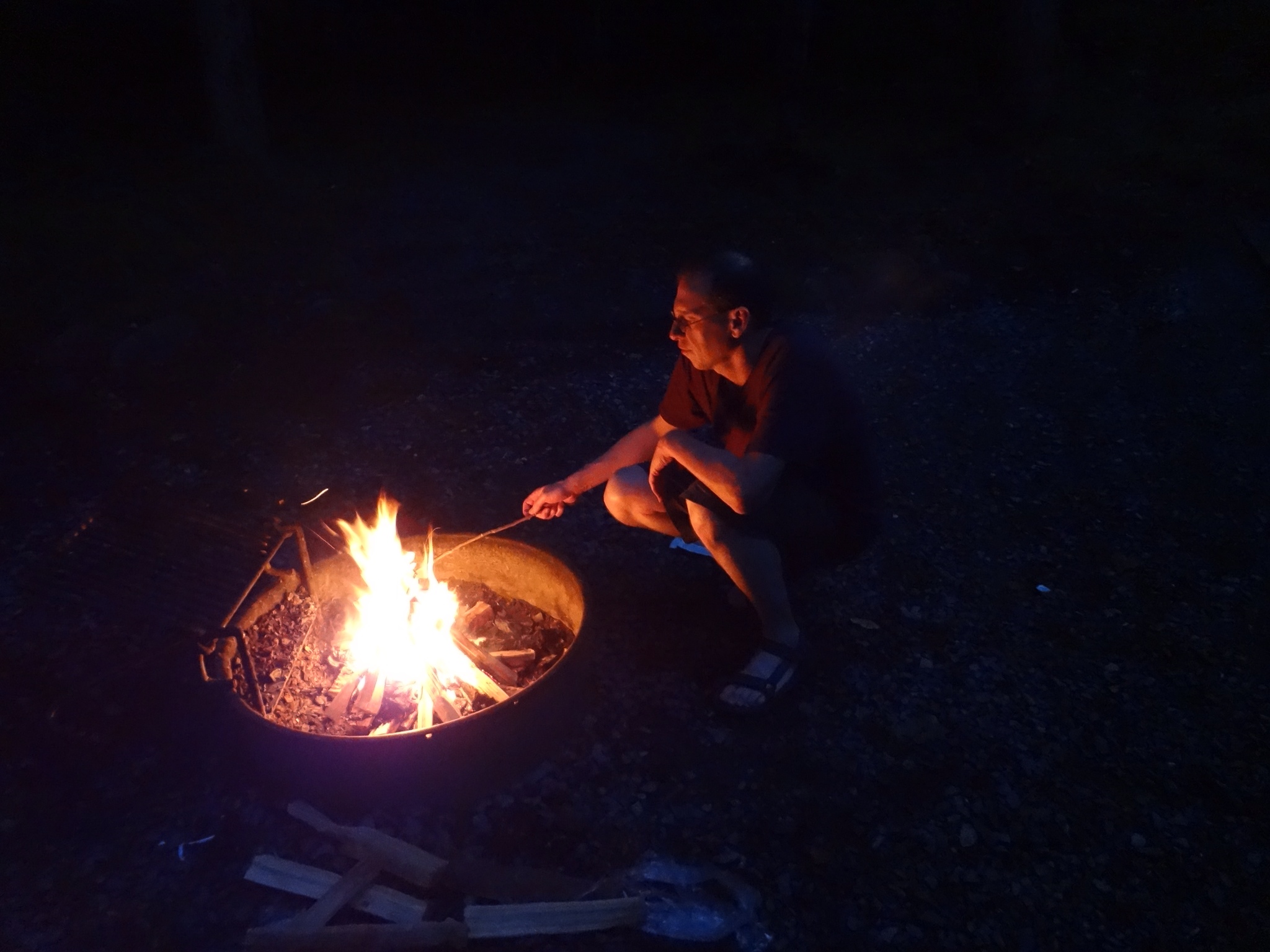 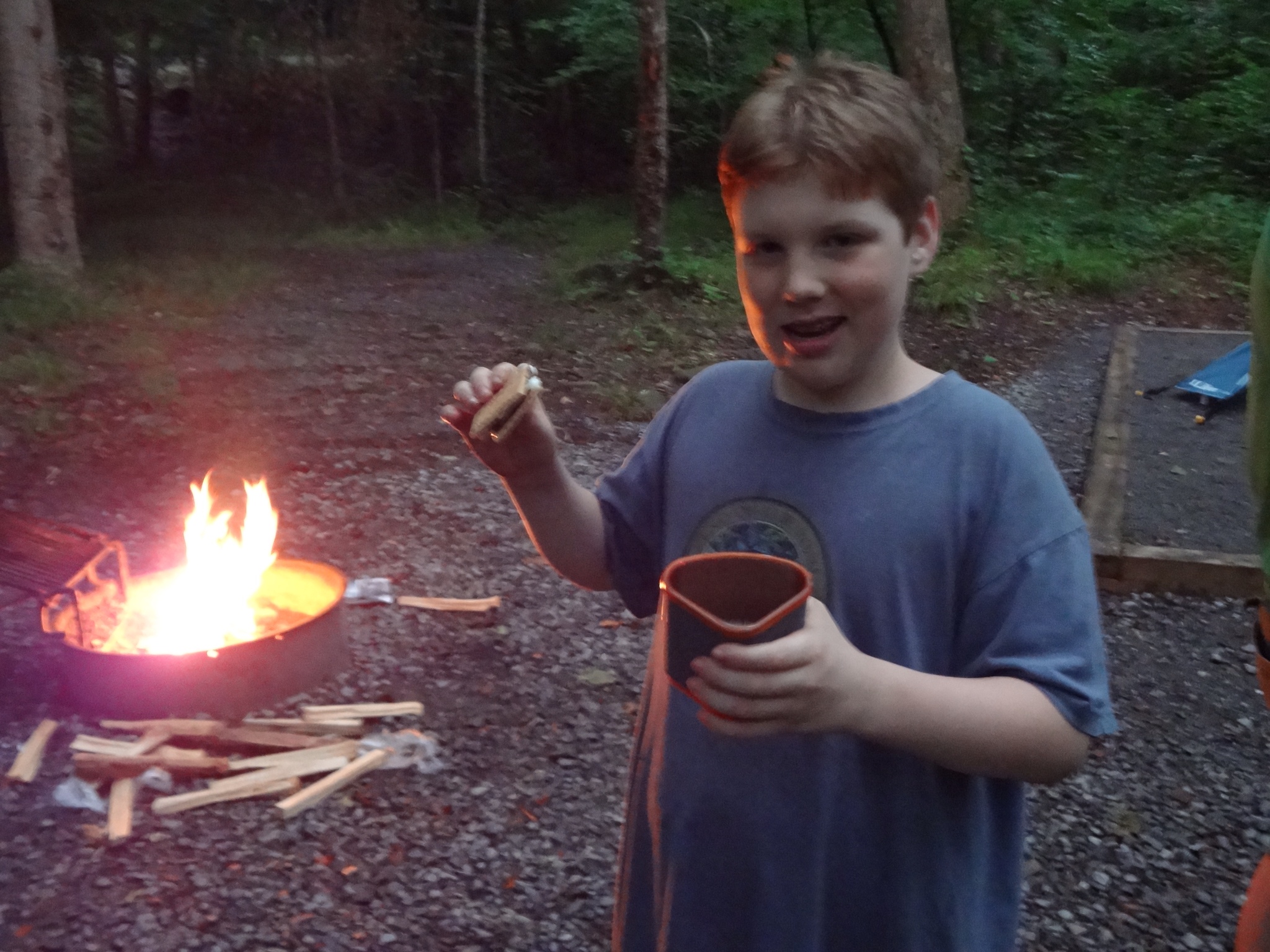