We left off on the deck project last time with the completion of the lower deck frame and the installation of the hot tub. The next step was to frame out the upper level. According to my reference guide, the preferred way to do two distinct levels using the same footers is to build a support wall. The wall is built with 2×4's that are in line with the joists that will rest on it: 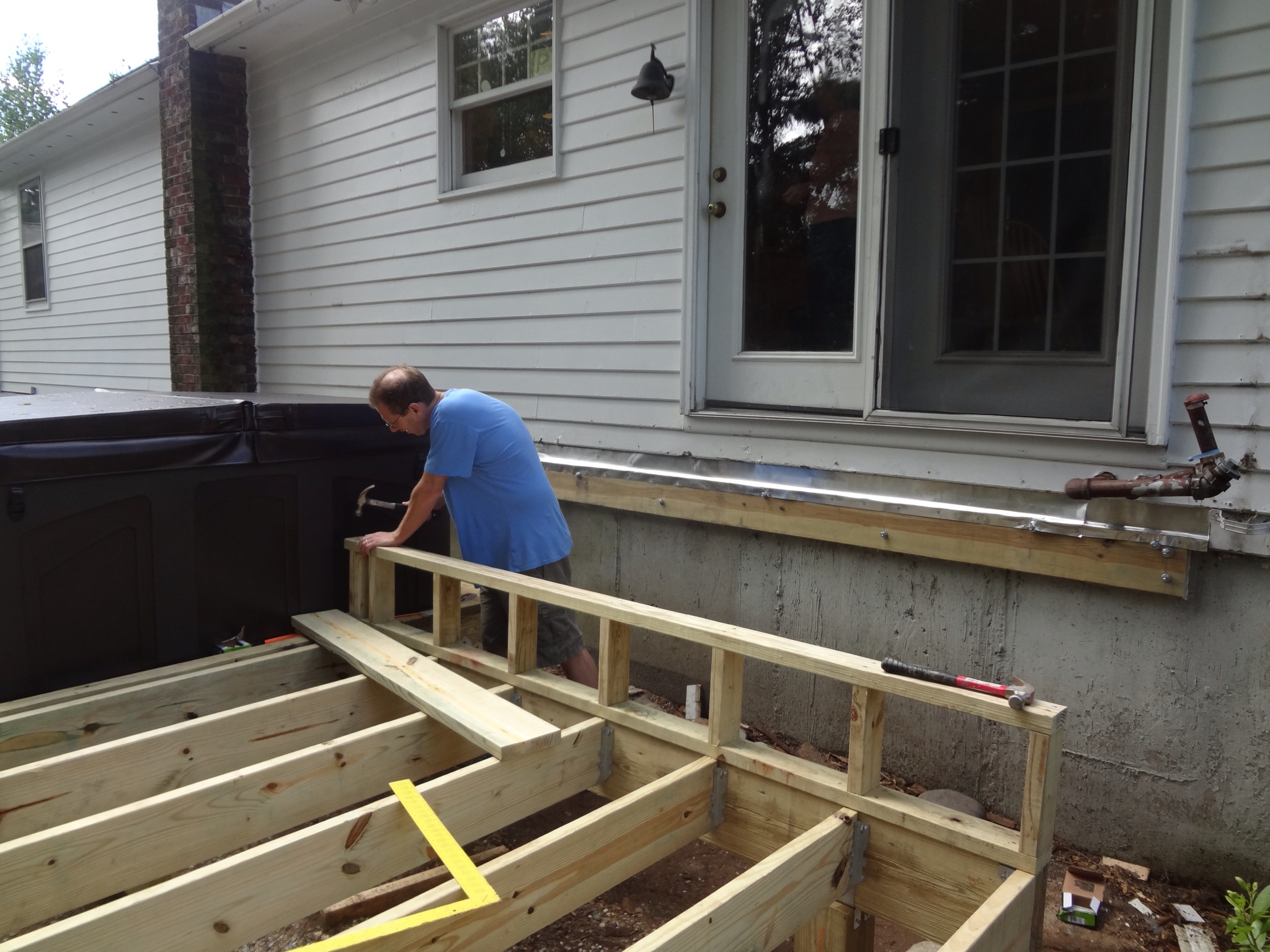 Once the wall was completed it was nailed onto the beam and then a sway brace was added to the back. Then the upper-level joists were attached to the ledger with hangers and set on top of the support wall. Finally, a rim board was nailed into the front of the joists and some brackets installed to further secure them to the support wall. At this point the platform was ready to support the staging of a classic gag photo: 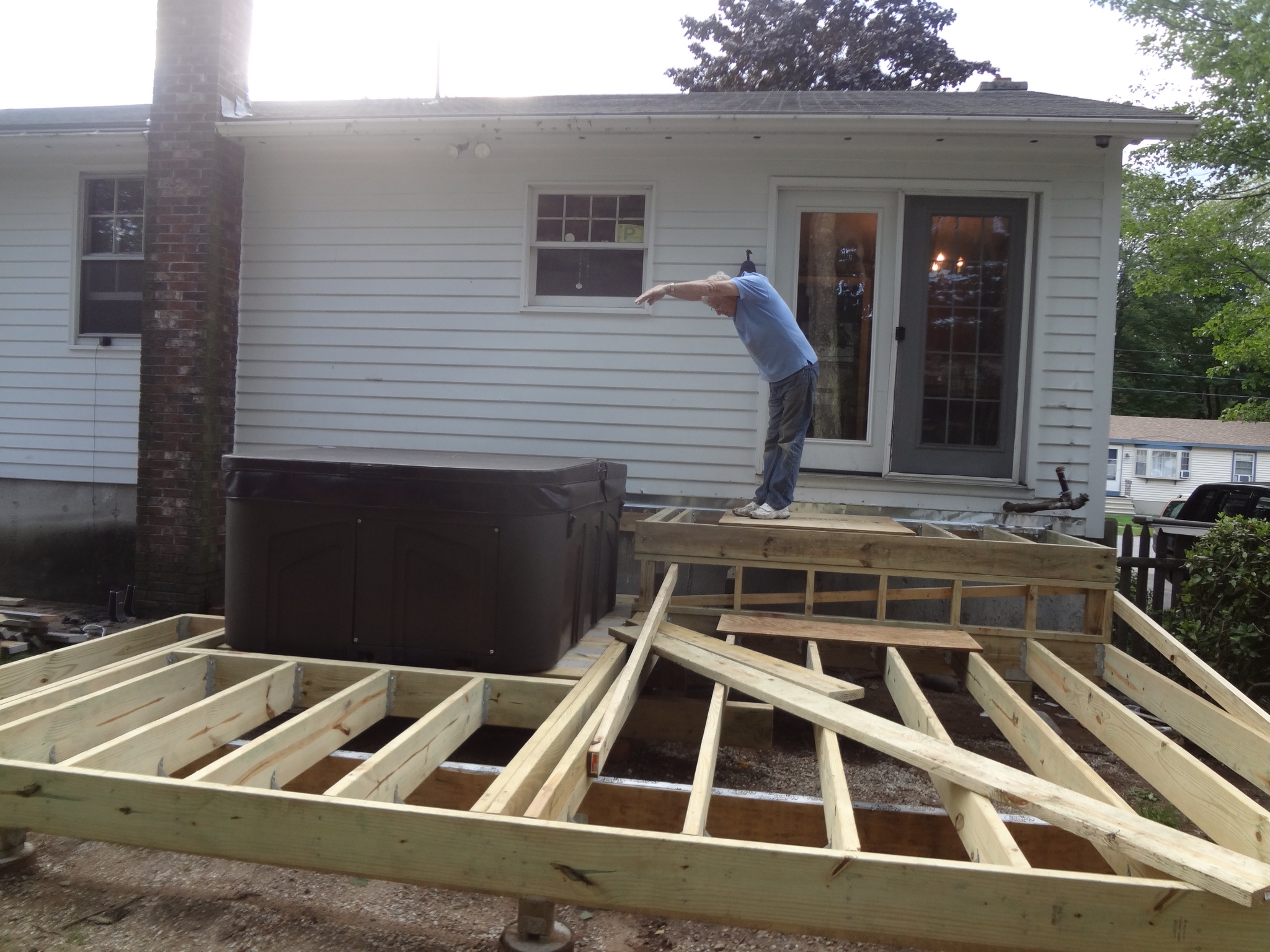 Next we built a much smaller wall around the other side of the hot tub and hung joists in the same fashion. This provided the necessary support for the inset framing around the back of the hot tub. 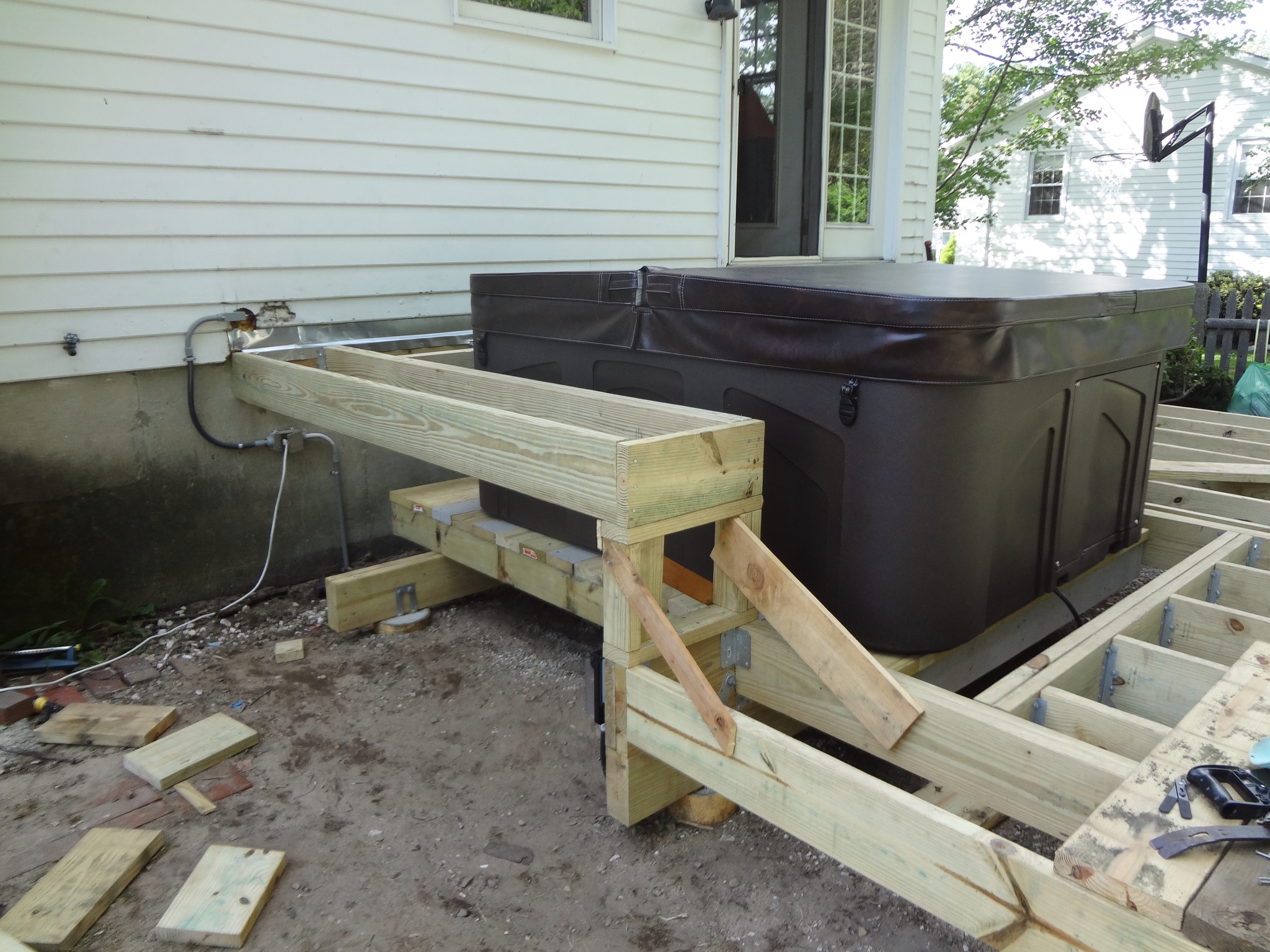 Here's a picture of the joists being attached behind the hot tub. In addition to using double joists around the tub, we also built up the beams on either side of the hot tub deck to add additional support. 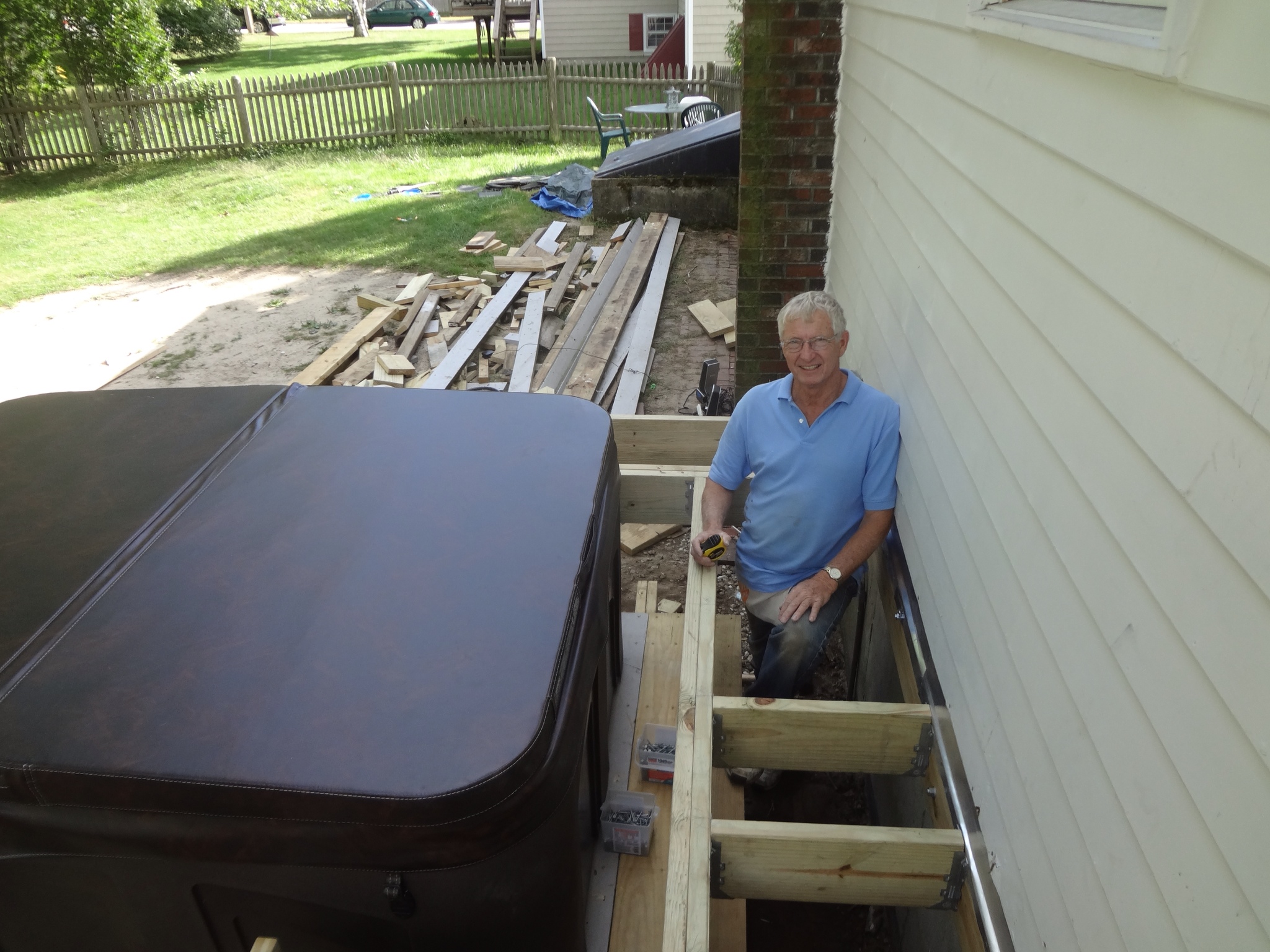 Once the upper deck framing was completed, the next thing we tackled were the steps between the two levels. These would be box steps, basically small platforms stacked on top of each other. We had to spend a lot of time figuring out the dimensions, taking into account the decking and back plates of the steps as well as the various code requirements. A big requirement was that the steps have a uniform height, which ultimately required both steps be built with boards of a non-standard width. This meant that we would need to rip a lot of 2×8 boards to the right width. 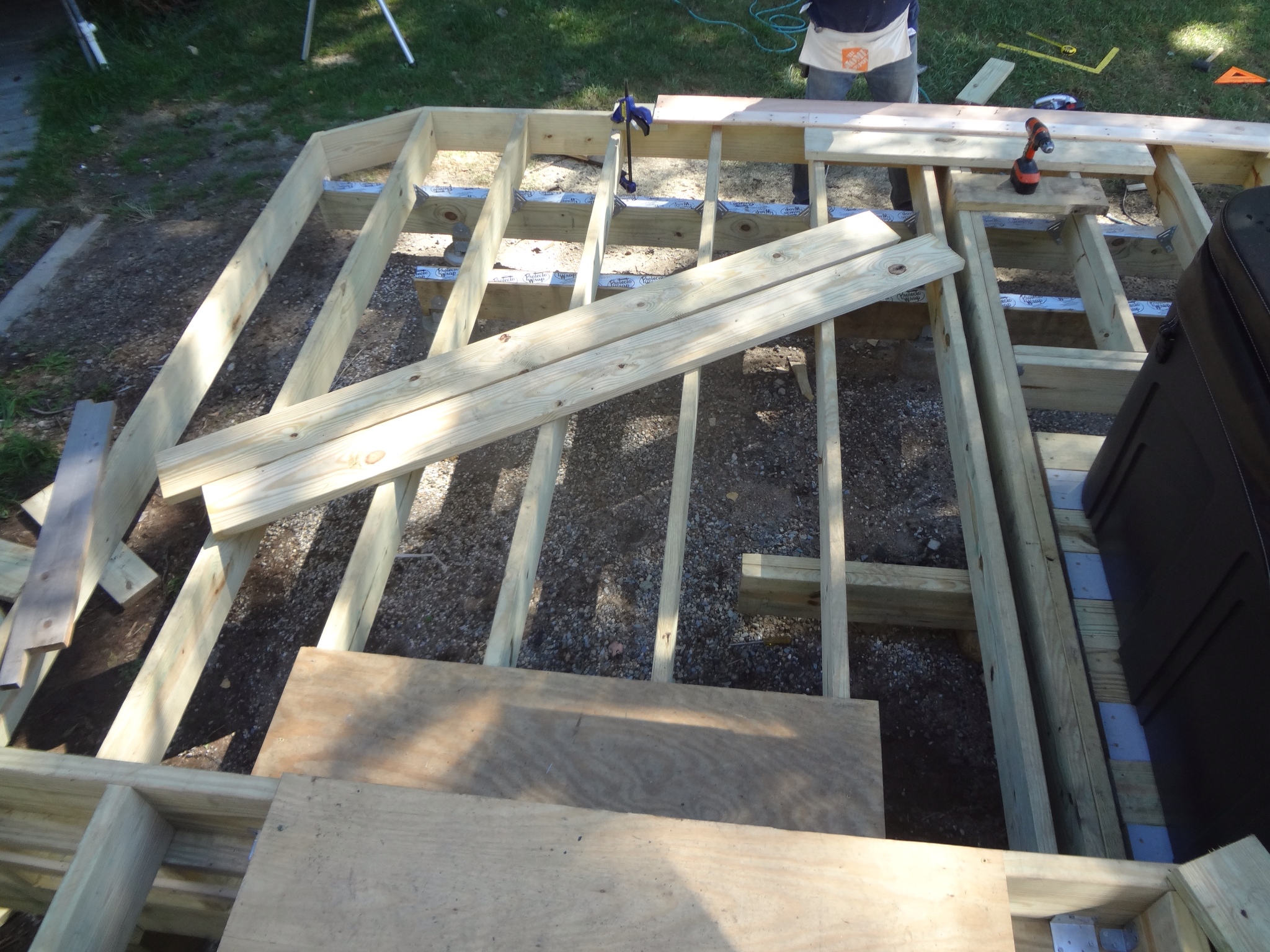 In preparation for this work I found plans online for a skill saw guide that would help with straight cuts. We had to rip about twenty boards for the stairs, so it was the worth the effort just for that but it would be useful at several other points in the project as well. 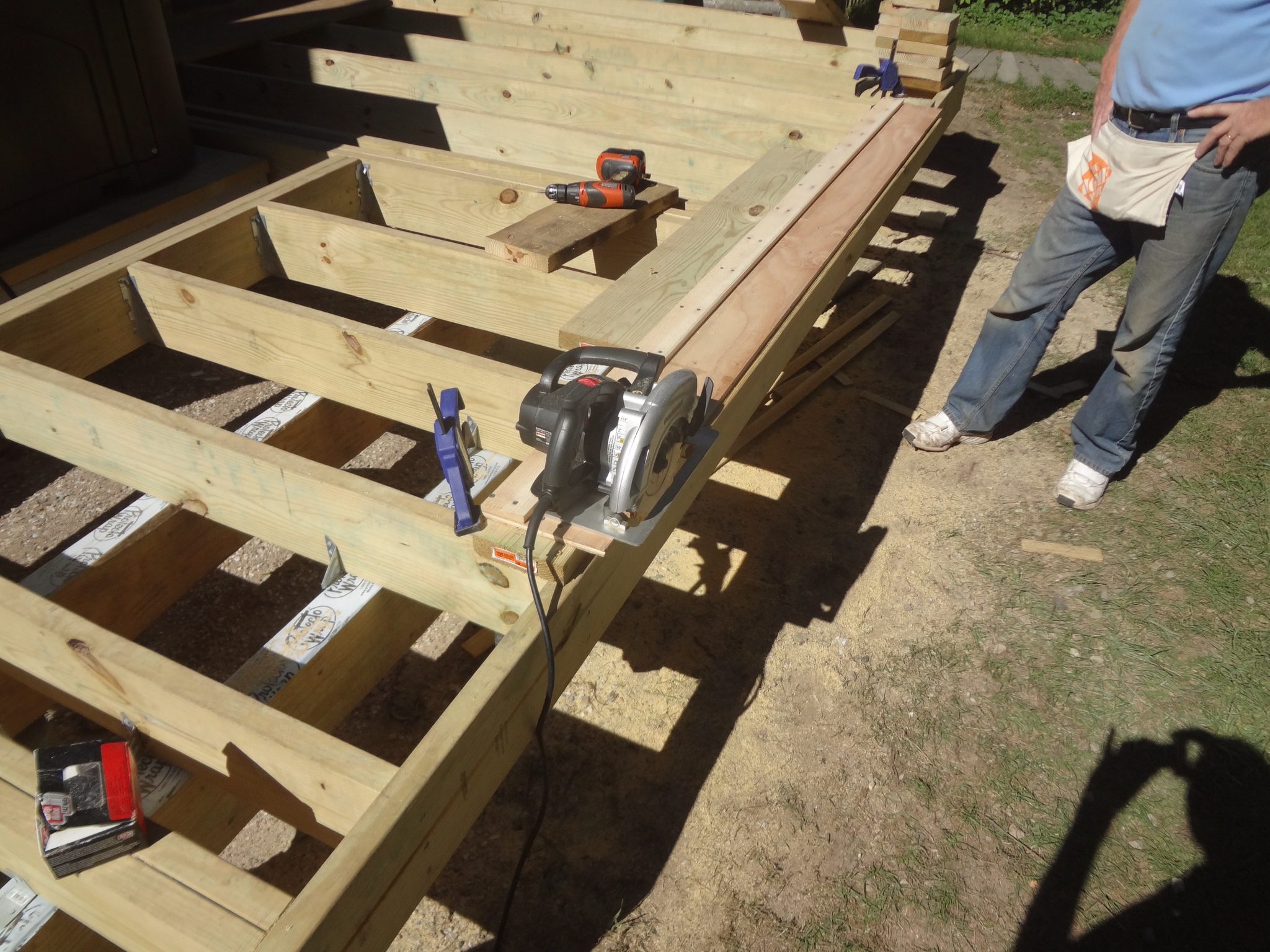 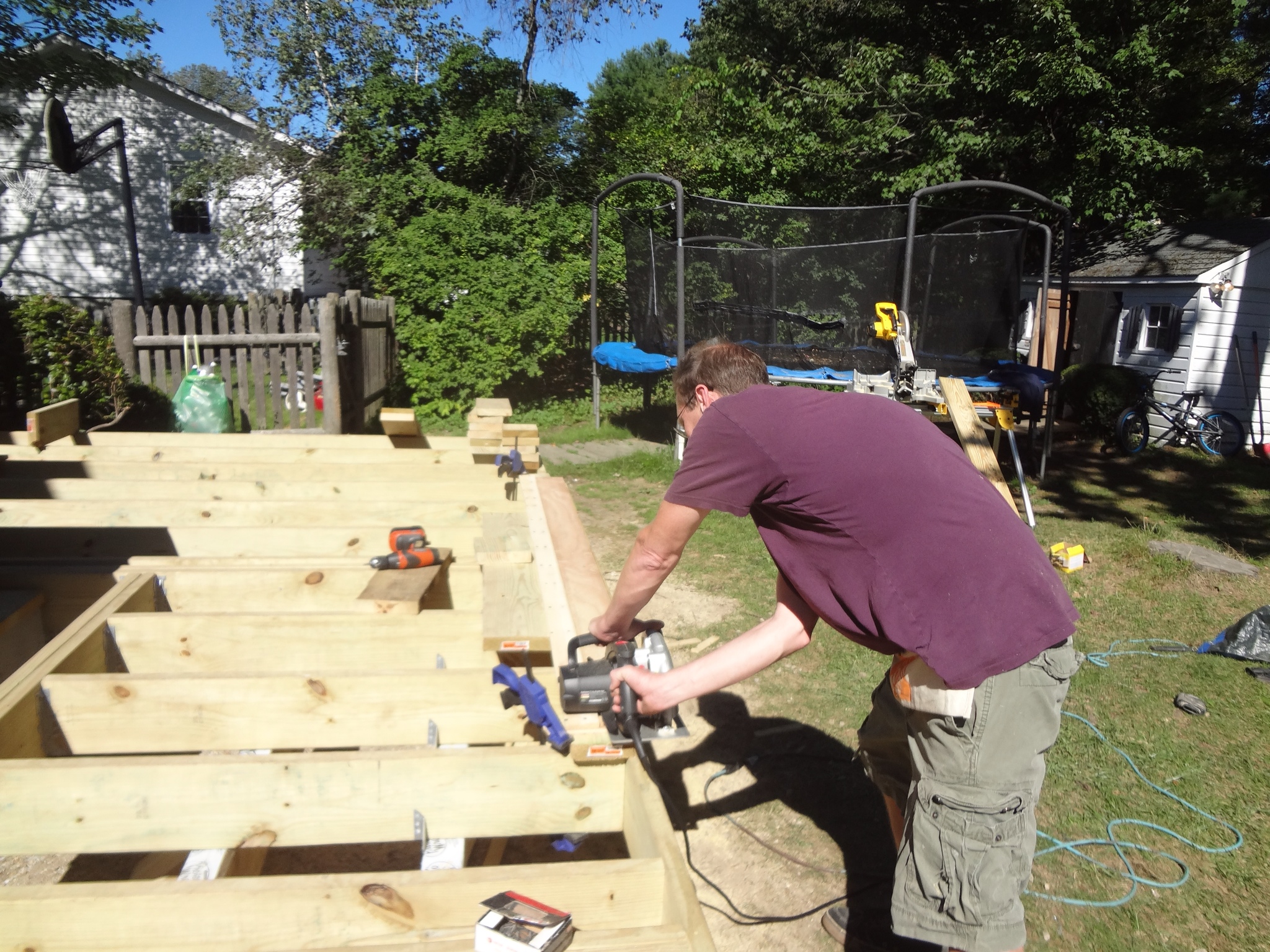 Once all the measuring and cutting was done, the boxes went together pretty easily with long deck screws. 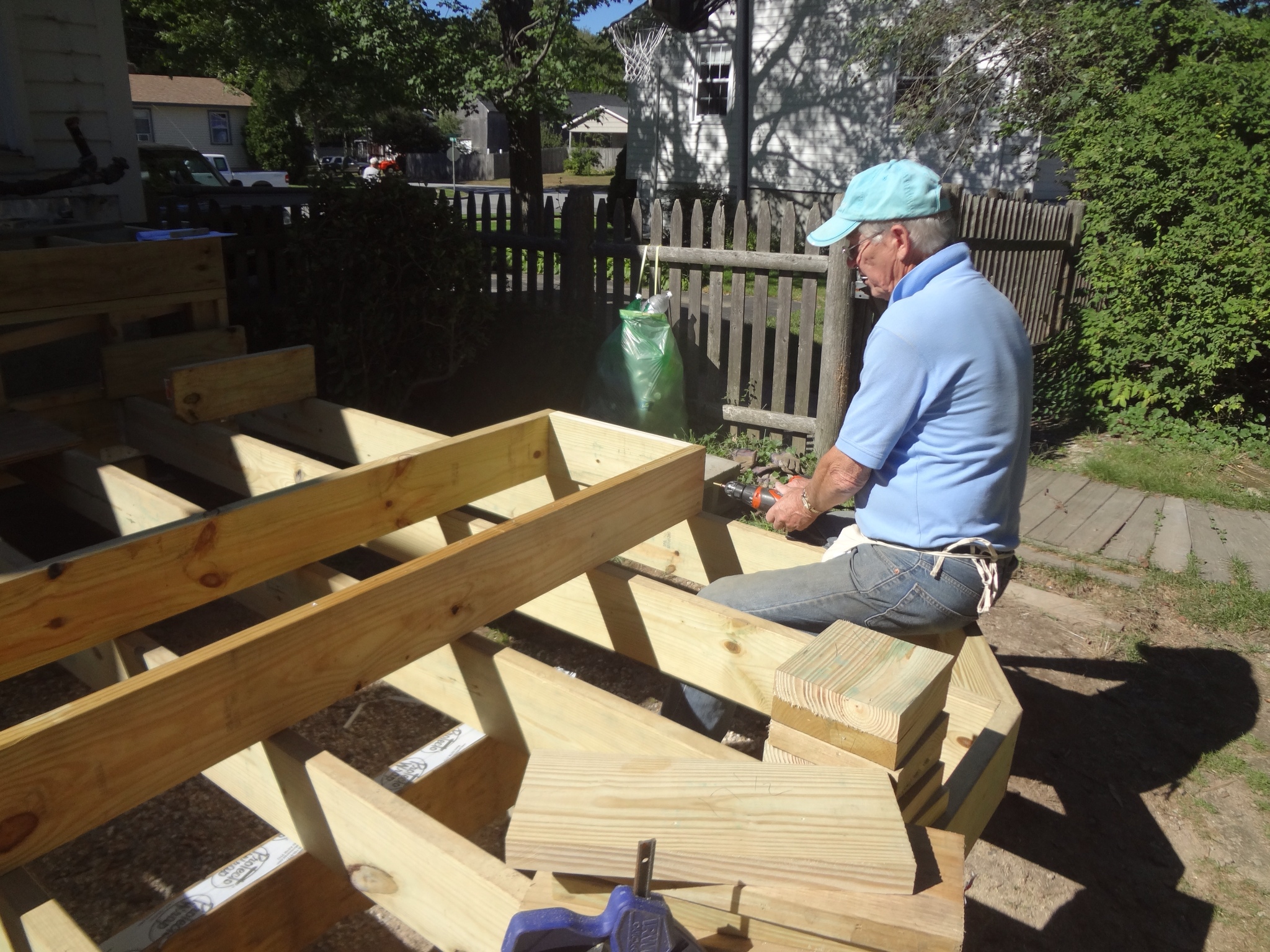 Next up was the pergola. At first I thought we could just install the posts and then do the rest once the decking was up. Once we started working with them it became clear the whole structure would need to be built first.

All of the posts are secured with 1/2 inch lag and through bolts from the front and sides, with additional blocking added to extend the support to a second joist. The front posts are attached to a beam. The ones next to the house are attached to the ledger. Originally I had planned to attach those to the siding as well but we had problems finding studs. With all of the anchoring bolts and braces in place, I'm pretty confident that the weight is sufficiently supported as is. I am curious what the builiding inspector's opinion will be, however. 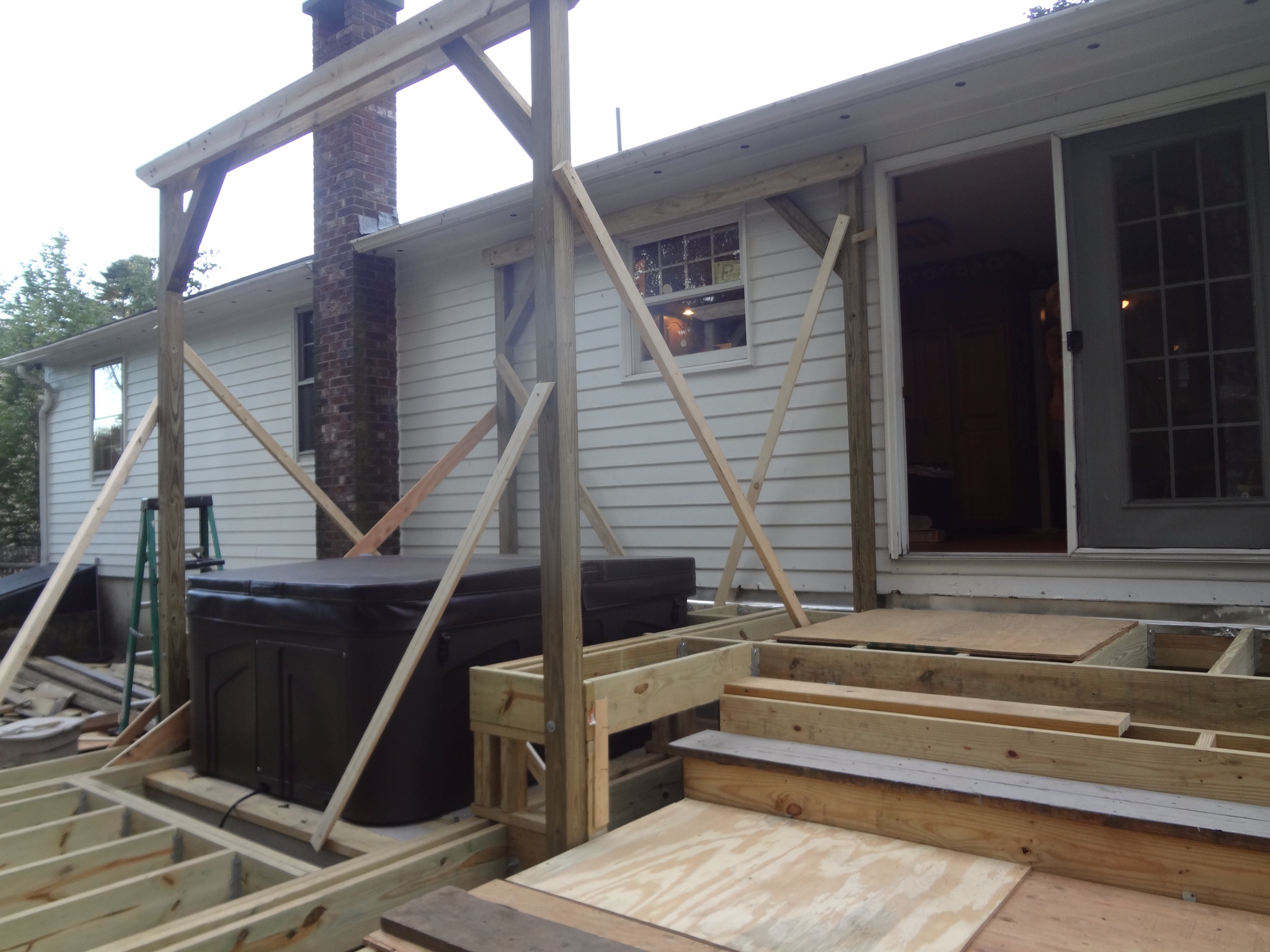 Building the pergola was probably the hardest part of the project so far, at least for me. It required a lot of ladder work, repetitive notch-cutting and repeated testing and removing of rafters to get the measurements right. The design was based on this and this. I found this article useful in validating the support structure. Here's what it looked like nearly complete: 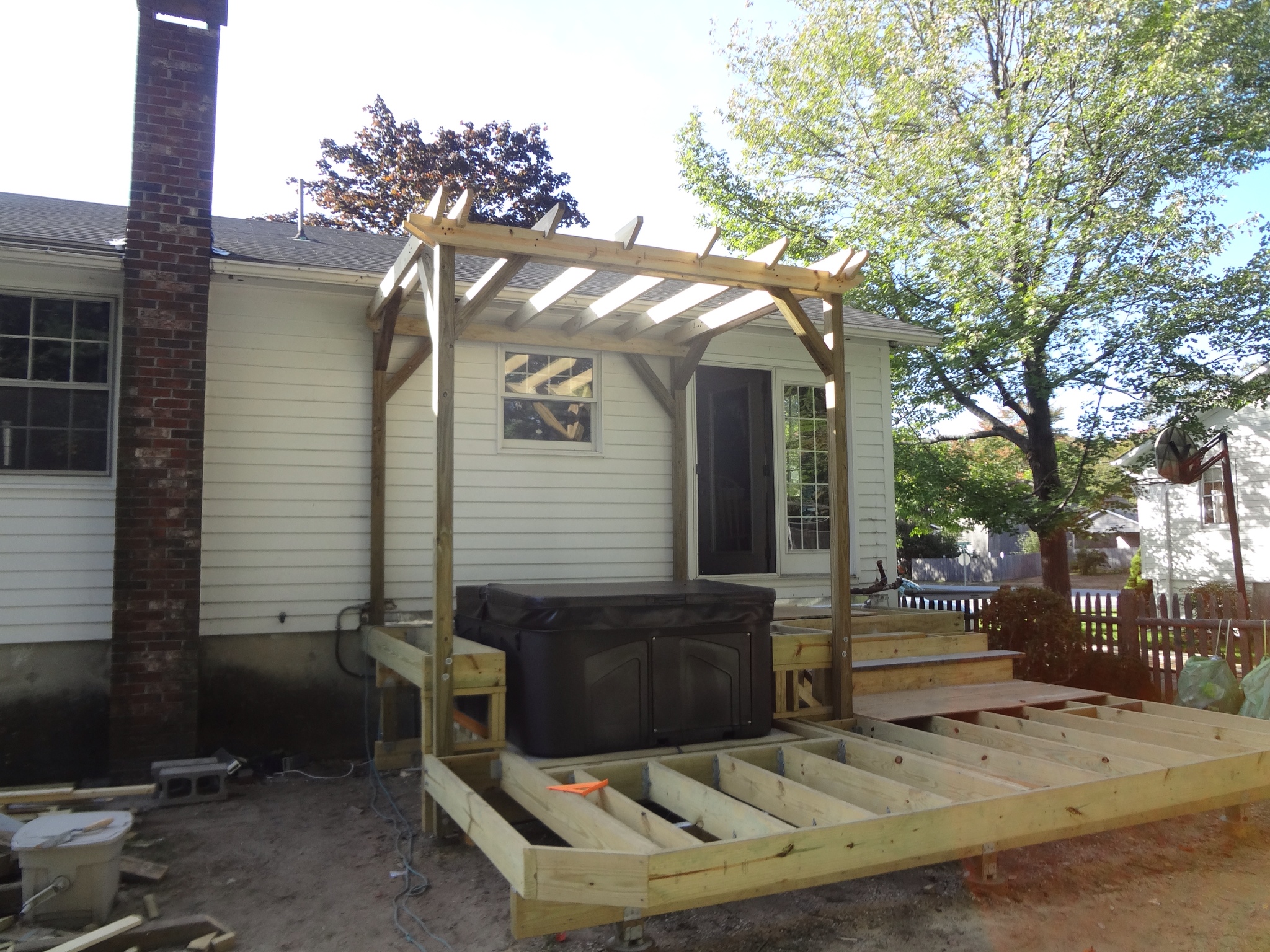 Finally it was time to install the cedar decking: 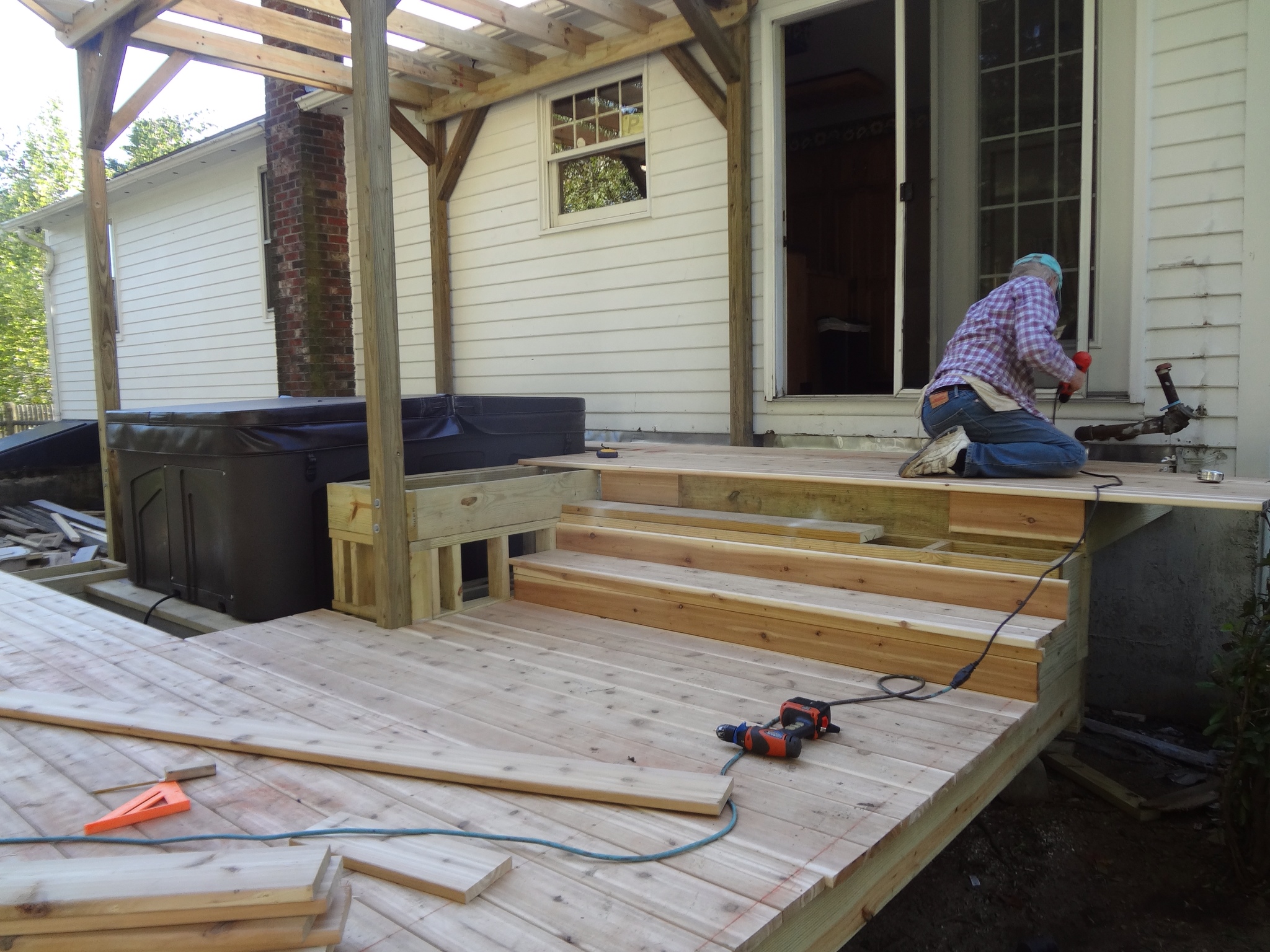 Once the main decking was done, the last thing we tackled for this round of work was the privacy screens. After a lot of fruitless searches, I finally found this link to be a good template for this project. Two more posts would need to be added. I decided to add a footer for the one on the far side of the house for more support: 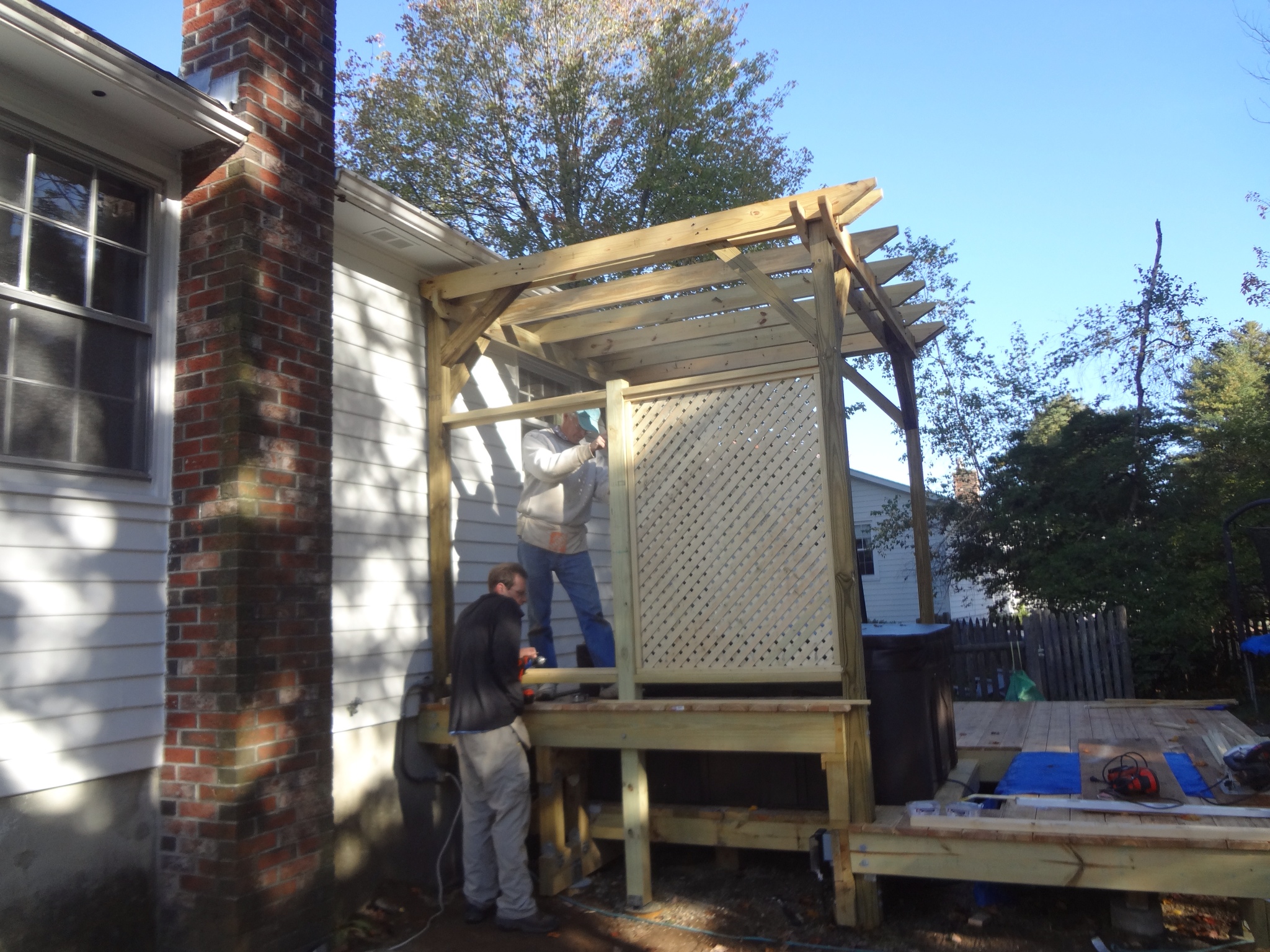 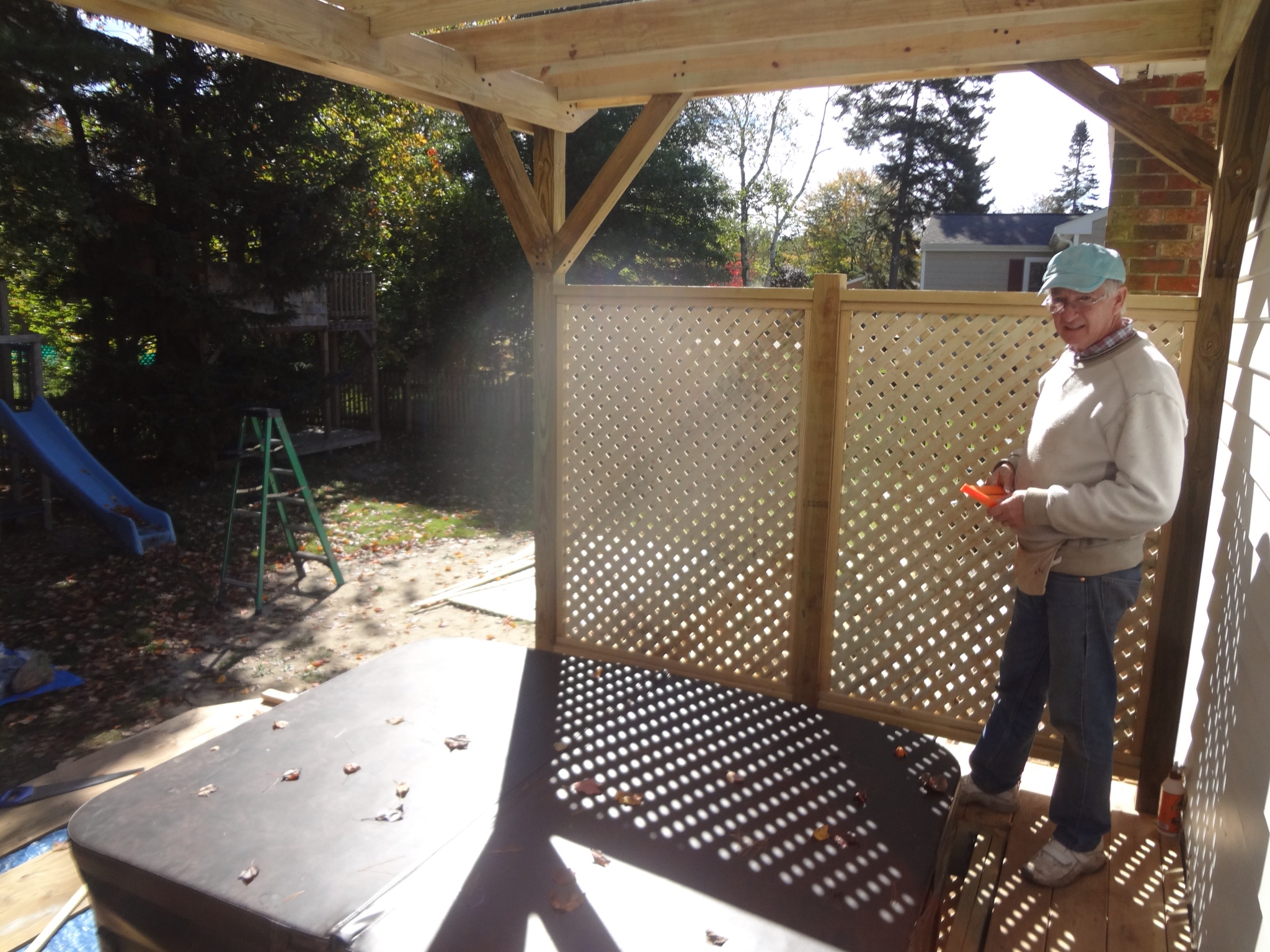 For the one near the door, we cut a hole in the deck and dropped a post in where it could be attached to a beam: 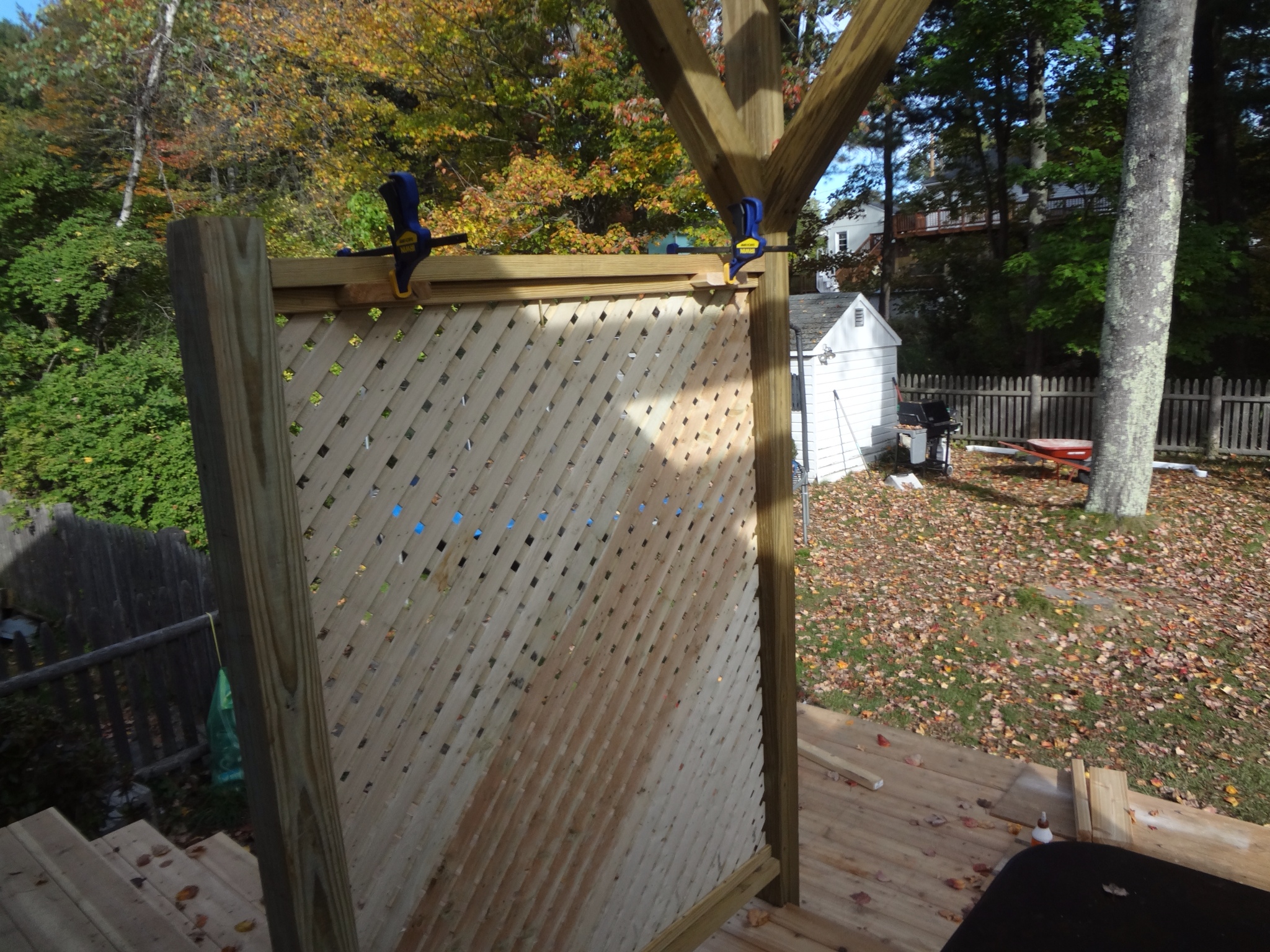 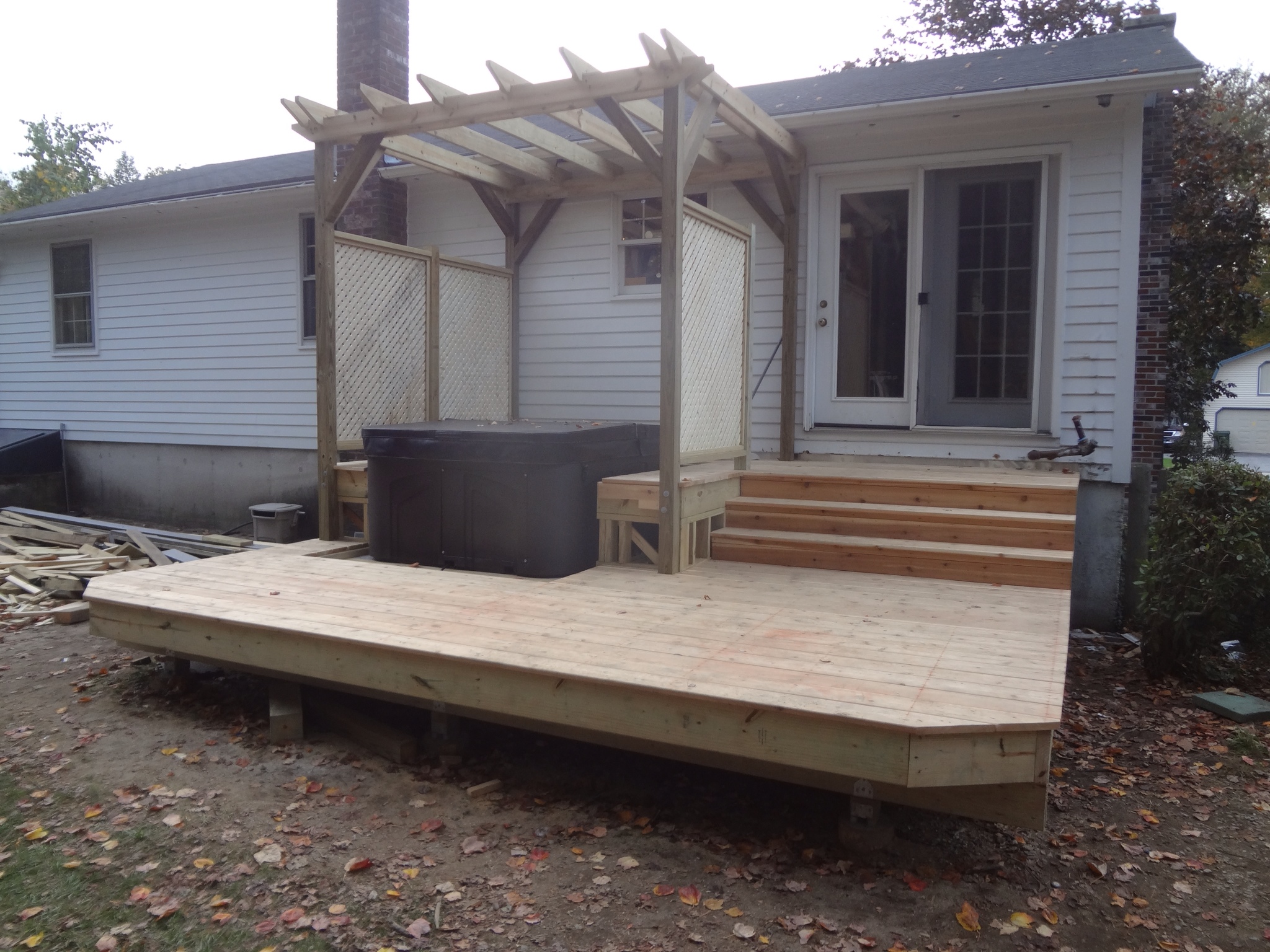 Still to do: more stairs, railing and decking around the hot tub.